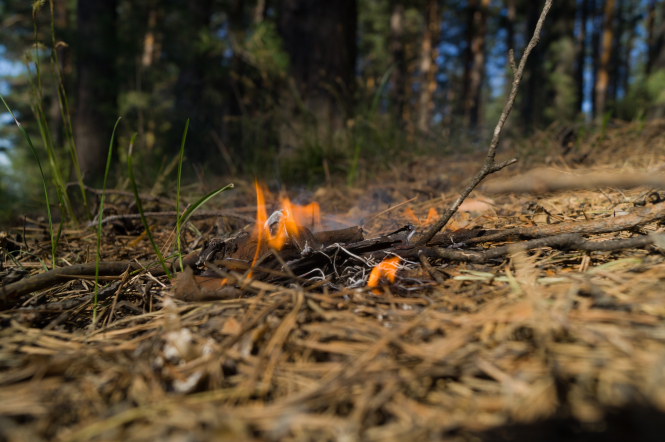 The cause of a fire which broke out on the edge of the historic forest of Paimpont, in Ille-et-Vilaine, Brittany, on Monday July 18, has been identified as a local resident burning garden waste.

The forest of Paimpont, also called forest of Brocélien in the 15th century, is the most famous wood of the region.

It is historically associated with the mystical forest of Brocéliande, one of the key sites of Arthurian legend in French tradition. It is often said that this is where Merlin is buried.

Firefighters brought the fire under control after about five to seven hectares burned, but the flames almost reached the Paimpont Biological Station of the University of Rennes, where about twenty scientists worked.

They were evacuated as a precaution and animals, including horses and monkeys, were kept safe on site.

According to the local gendarmerie, the fire broke out in a neighboring property where a 67-year-old man was burning garden waste: an illegal practice.

The fire spread due to the hot wind and high temperatures and the resident himself went to the gendarmes to inform them of the incident.

“He was recovered by the emergency services and hospitalized”, indicated the gendarmerie, and an investigation for “involuntary destruction by fire” was opened.

Ille-et-Vilaine experienced temperatures of 40C on Monday and most of the department is under drought alert, meaning water restrictions for residents and farmers.

What are the rules for burning garden waste?

It is normally against the law on the burning of garden waste in the open air.

Yard waste is a form of bio-waste. It can consist of:

The law allows individuals to mulch them or let them decompose in a composter.

There are collective green tippers in the landfills managed by your municipality, with which you can also often organize the collection of your garden cuttings outside your home.

There are a few rare exceptions to the rule of burning this waste, details of which you will find in the article below.

Read more: Can I burn leaves and other waste in my garden in France?

The Monts d’Arrée fire is “under control”

Some 1,725 ​​hectares of land have been burned by a forest fire in the Monts d’Arrée (Finistère), but firefighters have now declared that “the progression of the blaze is slowing down and the situation is under control”.

The fire broke out around Brasparts on Monday July 18 and led to the mobilization of 278 firefighters and 60 vehicles. Several roads were closed and 500 people had to be evacuated from towns like Botmeur.

Fire in Brittany: the fire slows its progress in the Monts d’Arréehttps://t.co/O5egwZE4Z6 pic.twitter.com/BwsSgW5b7U

Shocked !
The roof of the #Brittany in fire
Mont d’Arrée – Finistere
Courage and support for firefighters pic.twitter.com/ObNI2i22YD

To see the Monts d’Arrée and the chapel of Mont Saint-Michel de Brasparts on fire under 38°C, at the gates of my house: a disaster that takes you by the guts…

Can I have an outdoor fireplace or chimney in my formal garden?

Forest fires in France are raging: 20,000 hectares burned, an arrest made

Forest fires in France: why is it so difficult to control them?