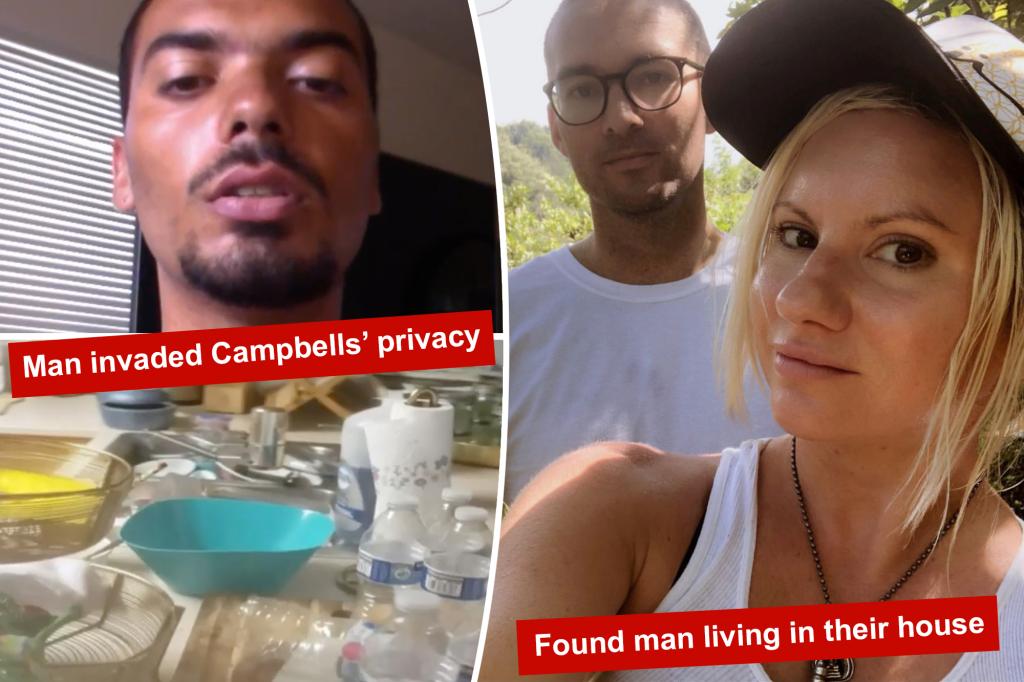 A stranger was secretly living with us

It was the bike sitting outside that alerted Brittany and James Campbell that something was wrong.

The couple and their two young sons had been away from their Honolulu home for about a week. They returned home on September 20, 2019 to find something terrible.

James went to open the front door of his house, but found he couldn’t. A stranger was inside, closing it.

“There is a man looking through the door. He tries to keep it closed and the man says ‘It’s not your house’ very calmly, James, 36 and who is in the US Navy, recalls in the new Lifetime true crime show , “Phrogging: Hider in My House.” “I’m just floored.”

The show, which premieres July 18, examines the crime known as “phrogging,” in which a stranger sneaks into someone’s space and secretly lives there for days, weeks or even months. The first half of the series premiere focuses on the terrible ordeal of the Campbells.

James grabbed a sledgehammer for protection and managed to drag the man out of the house while Brittany called 911. Once the intruder was in the front yard, James said, “We notice he’s wearing my clothes. Things are getting crazier and crazier right now.

Police arrived and arrested the man, a 23-year-old man named Ezequiel Zayas, KHON2 reported. But, after he was transported, the nightmare had only just begun.

The inside of their house was in total chaos. Pots and pans were stacked on top of each other. In the living room, James’ musical equipment had been removed. Their room was in a total mess.

It was “just trashed,” Brittany, 37 and a stay-at-home mom, told The Post.

What they found next was much more upsetting.

Someone had used one of his old laptops to record disturbing journal entries and family details.

“The [were] all these typed notes titled ‘The Omnivore Trials: A rehabilitation for Ratlike people’,” James said on the show.

“That’s when we realized this person had been with us for a lot longer,” Brittany told the Post.

Brittany noticed knives that had been placed next to the computer. And she found a typewritten ‘manifesto’ of gruesome plans for the Campbells – including surgeries such as ‘sex reconstruction’ and a ‘hand transplant’.

“He wanted to play doctor with us — and not in a cute little kid’s way,” Brittany said. “[He wrote about] how he could make us perfect people.

She also found a video the intruder had made on her computer, apparently while she was naked.

“This guy was sitting naked on my chair – it’s disgusting,” she says on the show. “I just felt terror.”

Suddenly, the family viewed the strange happenings in the house in recent months – a computer’s webcam on in the middle of the night, the doors left open or unlocked, the dog barking – with new horror. This is often the case with victims of phrogging.

“It starts out slow – things go away,” Everleth said, adding that people are more apt to believe they’re living with a ghost than a long-term intruder. “You think it’s an urban myth, but it’s more common than you think.”

The term phrogging, which is said to come from frogs jumping from place to place and is pronounced “frogging”, was only coined in recent years. But the crime itself has been happening for decades.

A&E’s True Crime Blog notes a 1986 case in which 17-year-old Daniel LaPlante found a hiding place in the home of Tina Bowen, a teenage girl he was obsessed with. LaPlante taunted the family by doing things like drinking leftover milk, which escalated into holding Tina and other family members hostage, according to the blog. Tina finally escaped and called for help.

“[Sometimes a phrogger] has a parasitic attachment to the owner or the house itself. It’s terrifying,” Everleth said.

Unlike squatters, who seek out empty, abandoned places, phroggers are not deterred by occupants. It takes until the landlord or tenant sees something like a hand or footprint, comes face to face with the intruder, or catches them on some sort of surveillance camera to figure out what’s going on. .

It’s still unclear how Zayas got into the Campbells’ two-story house or how long he hid there. But the newspaper mentioned very personal details about them, such as Brittany undergoing fertility treatments, which the couple had not shared with anyone.

“The strangest thing is that he knew medical information about us,” she told the Post. “It’s really weird.”

After his arrest, Zayas was charged with burglary and released. Soon after, he was arrested again, this time for allegedly vandalizing a Buddhist temple.

In 2020, while in a correctional facility for this crime, Zayas allegedly killed fellow inmate, 62-year-old Vance J. Grace.

He was charged with first and second degree murder in the fall of 2020 and pleaded not guilty. The man was “deemed unfit to continue” and is currently in Hawaii State Hospital, according to court records, awaiting trial.

The Campbells, meanwhile, are still recovering from the strange and heartbreaking ordeal and have since left their home of Honolulu and away from Hawaii.

“It was an incident that really affected us psychologically as a family. It uprooted our entire lives,” Brittany says. “Getting over it was really hard.”

Move in next door to Mark Zuckerberg for just $38.5 million