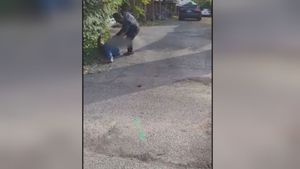 Charges were filed Friday against the suspect who assaulted a 62-year-old man in Des Moines on Tuesdaythe King County District Attorney’s Office announced.

Amani Kaleb Brown, 27, is charged with second-degree assault after punching and kicking a King County Water District worker as he and a co-worker attempted to locate a water main near Brown’s house. According to billing documents, the water district workers were actually on public easement property.

Des Moines Police say officers were called to an ongoing fight near 11th Avenue South and 222nd Street South in Des Moines just after 3 p.m. Tuesday. Officers were told by the 911 caller that the 62-year-old victim worked for the King County Water District and was “possibly unconscious” on the ground.

The 911 caller was a co-worker of the victim and he began recording the assault on his phone.

When officers arrived they found the victim conscious with swollen eyes and face and bloody shirt. Officers also saw a man matching Brown’s description walking away from the victim.

After a confrontation and struggle with officers, Brown was taken into custody.

According to the charging documents, Brown was uncooperative both during his arrest and in prison. It took four officers to get Brown into the patrol car, and Brown spat at the officers during the arrest.

The victim and his co-worker told police they worked for the Water District when, according to police, Brown approached the victim and said, “I’m having a bad day,” before stalking him. punch in the face.

Police say Brown continued to assault the victim on the ground before standing up to challenge the co-worker recording the incident. Brown then ran back to the victim, who had managed to get up, and punched him and knocked him to the ground.

According to the charging documents, the victim was apparently unconscious as Brown continued to kick and punch him.

Brown was jailed in King County Jail for 72 hours to investigate a second-degree assault.

On Thursday, Des Moines police learned that the King County District Attorney’s Office released Brown ahead of his first court hearing and before the office could gather full facts from detectives about the victim’s injuries.

Police say the probable cause certificate that was filed Wednesday by the detective in the case described the victim’s injuries, but the prosecutor’s office only received that information after the decision was made to release Brown.

Police also said the prosecutor’s office received a link to the video taken by the victim’s colleague, but that was only after the decision was made to release Brown.

According to the prosecutor’s office, Brown was charged with hit-and-run and reckless driving in Normandy Park beginning Oct. 26. Prosecutors argued that Brown’s bail should be set at $50,000, although Brown has yet to make his first court appearance, so bail has not been set.

On Friday evening, the Des Moines Police Department announced that Brown was taken into custody at his home without incident just before 5 p.m. He is currently being held in King County Jail.