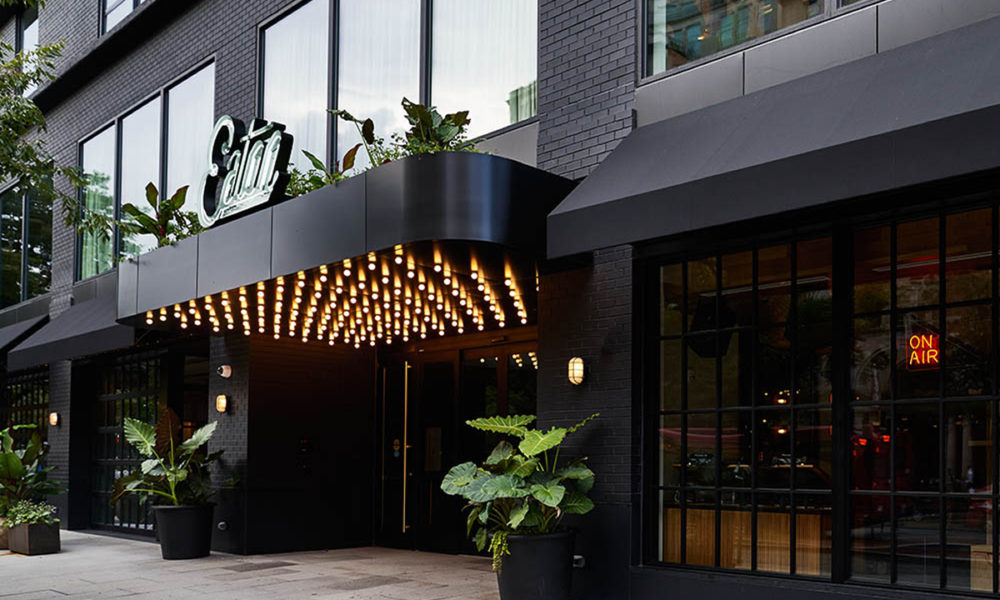 Book your DC stay at one of these LGBTQ-friendly hotels

If you’ve always passed Easton, Maryland on your rush to Rehoboth Beach, then you’re missing something.

Historic and charming, Easton offers stylish and friendly accommodations, an array of eclectic shops and galleries, award-winning restaurants and more in a welcoming environment for LGBTQ visitors.

Indeed, some of the city’s largest and most successful businesses are gay-owned, and Easton aims to attract more LGBTQ visitors this year, in part by hosting its first-ever Pride celebration in June.

“It’s a welcoming and safe place where people can be who they are and it’s a prime location for a more developed gay community,” said Eric Levinson, owner of the Hummingbird Inn. Levinson is among the organizers of Easton Pride, scheduled for June 17-19.

Levinson moved to Easton in 2017 and opened the hostel. He says he feared being openly gay because there weren’t many gay businesses. When someone flew their Pride flag that year from the porch of the inn, Levinson blogged about it and said he got a favorable response from the city. The owners of a nearby bed and breakfast bought him a new Pride flag and there have been no problems since.

In fact, during a recent Blade visit to Easton, Maryland gubernatorial candidate Tom Perez was in town for a campaign stop and one of the first questions he faced from the community was about their platform on LGBTQ issues.

“When I talk about jobs, justice and opportunity, LGBTQ inclusion has been a big part of that,” Perez said. “One of the privileges of my life has been to work on these issues.”

Easton is home to approximately 15,000 Talbot County residents and was incorporated in 1790, although its founding dates back to the early 1700s when the Maryland Provincial Assembly chose it as the site of a courthouse to serve the pre-revolutionary population of sea merchants and farmers, according to Discover Easton. It’s only a 90 minute drive from Washington, DC, and about the same from Rehoboth Beach.

Start your visit by checking the Hummingbird Inn (14 N. Aurora St.), a short walk to town, which offers six en-suite bedrooms, each named after east coast towns. The Queen Anne Victorian Inn is fully updated with modern baths. Try the newly remodeled and spacious Crisfield Room with its contemporary style and multiple seating areas on the third floor. The inn is dog-friendly, and in the mornings, Levinson ably takes on the role of chef, wowing guests with an unparalleled multi-course cooked-to-order breakfast. He says his travel experience in 70 countries around the world informs his approach to hospitality.

“I’m proud of our attention to detail,” he says. “I modeled the hostel on my travel experience. If I’m going somewhere, that’s what I expect — I need great products, towels, pillows. This is where I acquired the experience necessary to know what is expected of a traveler.

And his approach is working – he says at least six former guests have since bought homes in Easton.

Levinson even accommodates those with dietary restrictions at his famous breakfast, noting, “Just because you’re on a restricted diet doesn’t mean you shouldn’t have a good time.”

Chatting with locals, everyone seems to have enjoyed Levinson’s breakfast feast; it really is something to see, starting with a selection of homemade breads. On a recent visit there was a baked egg dish and a delicious French toast dish. Be sure to treat yourself – you won’t need lunch.

As for Pride, Levinson says he was approached by Delmarva Pride to plan an event. 2020 plans were scrapped due to COVID. But this year’s inaugural event will be a three-day celebration with a drag show, Pride dance at the hostel, as well as a street fair and Sunday brunch. Call the hostel to book as special ticket packages will be offered (410-822-0605). The hostel celebrates its fifth anniversary on August 6 with food, drink and a band. And if you’re planning a wedding, Levinson is ordained and has officiated at many gay ceremonies.

“I want people to know that this isn’t just a B&B and more than just a place to sleep because we host so many events here,” Levinson says.

One of the largest such events is the 18th Annual Easton Convention Outdoor Festival from July 15 to 24, the largest such festival in the country. According to the event site, “the plein air painters produce art from life (as opposed to the studio)” and this year 58 artists will be invited to the competition. The artwork is for sale, and the 2021 event brought in nearly $500,000 in sales. Visit pleinaireaston.com for more details.

As well as the Hummingbird, you’ll find all kinds of accommodation, from quaint B&Bs to Easton’s Grande Dame, the Tide Inna large hotel and conference center that dates back to 1947. Its restaurant, Hunters’ Tavern, is known for snapper soup, and the bar is cozy with friendly staff.

Once you’re checked in, explore the bustling boutique and gallery scene. Rediscover the lost pleasure of browsing a bookstore in Old books and fine arts (4 N. Washington St., vintagebooksmd.com). You’ll find all kinds of fascinating local stories and maritime-themed tomes.

Among the local galleries, Studio B Art Gallery stands. Owner Betty Huang, herself an accomplished artist, represents many esteemed painters and the gallery will host an outdoor workshop with Master Jove Wang on July 11. Visit studiobartgallery.com for details.

Marc Del Pino owns the store and sits on the Discover Easton Board of Directors. Over happy hour drinks, he also looks like the unofficial mayor of the city, as everyone who enters stops to say hello. Originally from Trinidad, Del Pino moved to New York and then to Easton. He has been in business in Easton for 29 years.

“I thought I would have a problem moving here, but I never did,” he says. “I never felt like a stranger or out of place; I felt like I was coming home when I first came here. … I was tired of New York, it reminds me of Trinidad here being smaller with a lovely downtown.

All these purchases will leave you hungry and there is no shortage of restaurants. Among the best is Scossa (8 N. Washington St.), owned by Italian-born chef Giancarlo Tondin, who began his career at Harry’s Bar in Venice. He then worked for the Cipriani family’s many restaurants in New York, including the Rainbow Room before moving to Easton. It specializes in northern Italian cuisine.

Another star is out of the fire (22 Goldsborough St.), a farm-to-table bistro offering globally inspired dishes and an open kitchen. Try the warm confit chicken and roasted apple salad or browse an extensive pizza menu, from duck sausage to a vegan option.

The square (108 N. Washington St., thewardroom.com) offers a market as well as lunch and dinner fare, like homemade pastas and tempting selections of charcuterie, cheeses and wines.

After dinner, head to the historic Avalon Theater. The building dates from the early 1920s but has been renovated and reinvented over the years. Today, the Avalon features musical and dramatic theater, symphony orchestras, national musical acts as well as local talent, according to its site. This summer brings a wide range of programming, from “Hamlet” to a free community parenting conference. Visit avalonfoundation.org for more information.

For a laid-back and welcoming getaway without the summer beach crowds, Easton is a relaxing destination full of history, culture, top-notch restaurants and upscale shopping in an LGBTQ city near DC

As Del Pino said, “I could go anywhere in the world, but I cross the Bay Bridge and I’m home – a piece of heaven.”