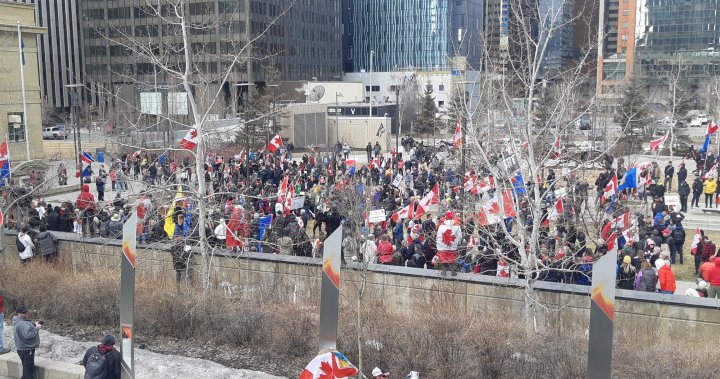 Two people were arrested at two anti-warrant rallies in Calgary on Saturday.

One started at Olympic Plaza, with about 200 people, who then walked down Stephen Avenue to Harley Hotchkiss Gardens.

Trevor Simpson was one of them.

“For the freedom of all Canadians,” Simpson said, explaining why he was at the rally. “My grandfather fought in Normandy. There’s a reason we have freedoms, and we haven’t had freedoms in a long time in this country.

The group eventually returned to the town hall before dispersing.

About 200 other people gathered at Prince’s Island Park for a second protest.

Calgary police said that’s where they arrested a protester for violating the injunction in place, which prohibits people from ringing horns, blocking traffic and congregating in a park that disrupts many unreasonable use of the park.

We continue to monitor protesters as they move and have arrested one person for violating the injunction. #yyc pic.twitter.com/37ndSOYvzg

A second person was arrested for two outstanding warrants.

Under the Highway Traffic Act, the CPS issued 19 summonses including 14 for excessive use of a horn and additional violations for expired registration and equipment violations. More tickets are expected based on the evidence collected during the protests.

The settlement issued a subpoena for violating the injunction and 25 tickets, including 23 for excessive honking, one for illegal use of a drone and one ticket for operating a commercial kiosk without a license.

A vehicle was towed to the impound lot because it was not registered.

Police said there were no injuries or property damage during the protests.

“Our goal even today was to reduce the impact of these protests on residents and visitors to our downtown. This was largely achieved through the collective efforts of our officers and partner agencies,” Deputy Chief Chad Tawfik said in a press release Saturday evening.

“We expect these protests to continue in Calgary as they have in other cities across Canada. We are committed to doing everything we can to ensure that the rights of those who protest do not negatively impact others in the city of Calgary. We would like to thank those involved who complied before and during the protests.

For months, rallies have been held in Central Memorial Park, usually followed by a march on 17th Avenue.

On Saturday, a small group of people from Community Solidarity YYC set up lawn chairs in the park.

Hunter Yaworski of the group was one of those who enjoyed the quiet.

“It’s really nice and I’m sure a lot of people who live in the building surrounding this park and on 17th Avenue enjoy it as well. A lovely quiet afternoon. There is no horn.

In a Los Angeles enclave where celebrities and businessmen live, a massive home sells for $70 million