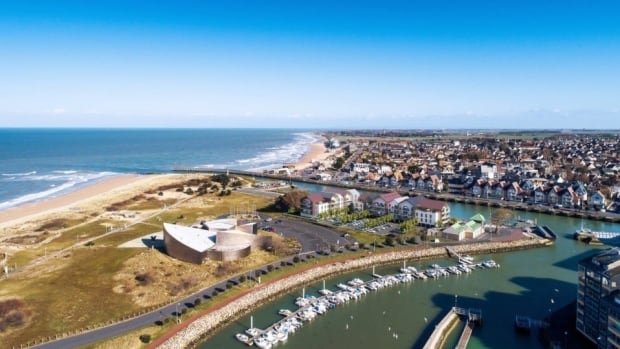 The future of Juno Beach — and the center commemorating the scene of Canada’s iconic Second World War battle — is secure.

The federal government agreed to help buy land from a developer who planned to build condos near the historic site.

This investment ends an emotional struggle for many Canadian veterans and their families.

On June 6, 1944, 340 Canadian soldiers died and more than 800 were wounded taking the beach from entrenched German defenders. This was a key event in the D-Day invasion and the war.

The land to be developed borders the Juno Beach Centre, a private Canadian museum.

For more than two years, the museum had been engaged in a legal battle with French developer Focim, which had planned to build two buildings with 66 condos near the beach. Construction was to begin this fall.

“There are parts of land that should never be touched,” Veterans Affairs Minister Lawrence MacAulay said of the federal government’s decision to help buy land near France’s historic Juno Beach landing site.

“We have loads of Canadians writing to me and the prime minister,” Veterans Affairs Minister Lawrence MacAulay said Friday after the official announcement.

“Working with the French government and the city, we were able to stop it, and I’m so glad the land [will] be preserved for years to come.

Last week, the town council of Courseulles-Sur-Mer decided to buy the land with the help of the Canadian and French governments in order to preserve the site. Canada’s contribution will be approximately $4 million. France’s contribution was not disclosed.

The deal to secure the beachfront area will be done in two stages, a MacAulay office official said, speaking in the background ahead of the announcement.

An upfront cash payment will cover the cost of securing the land and reimbursing the developer for restoration work already carried out. A 99 year lease of the property will be negotiated.

Remembering those who “fought for freedom”

Michel Miraillet, France’s ambassador to Canada, said preserving the site was vital to the French government and had to negotiate with the municipal government to get the deal.

And in light of recent events in Eastern Europe, he added, clinging to the reminder of the sacrifices of World War II is more important than ever.

“At the present time, where freedom is contested and where some countries are facing Russian aggression, I think it is very simple to maintain the memories and the memory of those who fought for freedom” , said Miraillet.

Retired Brigadier General Ernest Beno, director of the Juno Beach Center, said the center was relieved to see the dispute resolved. He and the center’s executive director, Alex Fitzgerald-Black, said the support in the community of Courseulles-Sur-Mer was extremely important.

A pro-development city council initially pushed the project forward. It has become a local issue and one of the defining aspects of the 2020 local municipal election, which saw the council replaced by one willing to negotiate the future of the site, Fitzgerald-Black said.

“One step too far for Canadians”

The condo development “was one step too far for Canadians,” said Cindy Clegg of the Save Juno Beach campaign.

“Our efforts to save Juno Beach from development revealed to Canadians what was happening in France, at a time when authorities were turning a blind eye,” she said. “It should never have come to this.

“Every Remembrance Day, Canadians promise never to forget the sacrifices made for future generations. And this year, we forced our government to step in and protect our country’s legacy and reputation as an ally and a force for good in a war-torn war. world.”

Much of the dispute between the developer and the Juno Beach Center centered on the use of a road—Voie des Français Libres—built and operated by the museum.

Focim planned to use the road during construction. The museum attempted to block access to the developer on the grounds that the construction – which it called an “existential threat” – would disrupt access to the site.

In April, MacAulay vowed to do “everything possible” to settle the dispute after meeting with the mayor of Courseulles-sur-Mer and the French minister responsible for remembrance and veterans to stress the importance of commemorating fallen Canadians. at Juno.

“My job is to convey how important it is to honor and commemorate and of course how important Juno Beach is to Canada because a lot of our blood was shed here,” MacAulay told the ‘era.

On Friday, MacAulay called the battle of Juno Beach one of the most ambitious military operations the world has ever seen, saying protecting it for posterity is important not only for Canada, but also for France.

“The story of Juno Beach and the Battle of Normandy, and the brave men who fought there, is a vitally important chapter in our history. This agreement will save and preserve this part of Juno Beach for future generations,” he said.

But after the announcement, Caputo took to Twitter to slam MacAulay for not acting sooner.

“That it took the pressure of thousands of Canadians, a mandate from the veterans affairs committee and petitions from myself and other MPs as we stood on Juno Beach itself for the Minister to make this sensible decision is a sad reality,” he said. in a tweet.

The mayor of Courseulles-sur-Mer, Anne-Marie Philippeaux, said her government had taken steps to help protect the site to ensure it would be there for future generations.

“By purchasing this land in the Juno sector, with the intention of making it available to Canadians, the elected officials of Courseulles-sur-Mer continue the commitment of the elected officials who, on November 10, 2001, made land available of the Juno Beach Center…in honor of all those who served in the Canadian military during World War II,” she said in a statement.