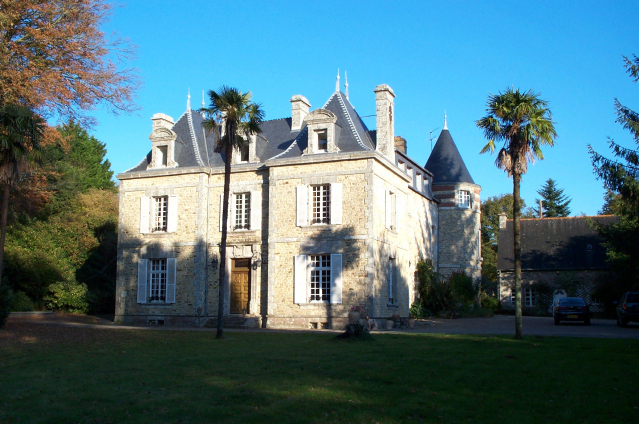 Château de Bretagne for sale at € 326,000 at auction except overbidding

A large chateau in Brittany located on 14 hectares of land, with a swimming pool, two basements, a library and two outdoor gÃ®tes, is auctioned off with the highest bid currently at â‚¬ 326,000 .

The ChÃ¢teau de GuÃ©nanec in Plumelin (Morbihan) was auctioned on November 25 during the initial offer, but auctions on the property will remain open until Monday December 6.

The owner, Marie-JosÃ¨phe Dussolle, now in her seventies, bought the castle with her husband in 2006 with the project of making it a guest house and holiday lodges. The couple set about restoring the property, especially parts of the roof, which needed to be fully replaced.

However, in 2014, Ms. Dussolle found that there was water damage to the property and therefore filed a claim with her insurers. The origin of the problem was not initially found and the expert sent by the insurance company to carry out the assessment did not assess the newly installed roof.

It wasn’t until 2017 that the roof was found to be the source of the problem, when the damage spread.

Ms Dussolle then filed another claim with her insurance, but confusion over the original date of the 10-year warranty agreement led to the claim being denied. Ms Dussolle then turned to lawyers, who initiated legal proceedings to determine who was responsible for the damage to the property. The proceedings are still ongoing after being delayed by lawyer strikes and the coronavirus pandemic.

Mrs Dussolle said The connection that the property has â€œenormous potentialâ€, and that when she bought it, the project was a dream for her.

Her initial auction price was set at â‚¬ 200,000, but she says this is only the case because there is a lot of work to be done on it. She said she believed it was worth a lot more. The couple have spent between â‚¬ 400,000 and â‚¬ 500,000 on renovations over the years, not counting the initial renovations made when they first moved in.

The property was almost sold in 2012 for 1.3 million euros to a buyer who wanted to turn it into a holiday village or seaside resort, known as residential leisure park (PRL) in French. However, the sale failed at the last minute because the buyer did not sell their other properties to finance the purchase.

Ms Dussolle, who has suffered from health issues in recent years including a diagnosis of breast cancer, said she hoped a higher offer would arrive before the deadline.

More details about the property can be found on the Avoventes website, at this link.

Interested buyers have until Monday, December 6 to start the process, and can contact Marie-JosÃ¨phe Dussolle for more information at [email protected] or by phone at 06 87 63 61 62.

ChÃ¢teau life in France: “Cold winters and hard work, but no regrets”

ChÃ¢teau de la Mercerie: Folly of brothers who could not stop building

News from the French real estate market: Our November review

French real estate: what is 100,000 â‚¬ buying you without needing to renovate?