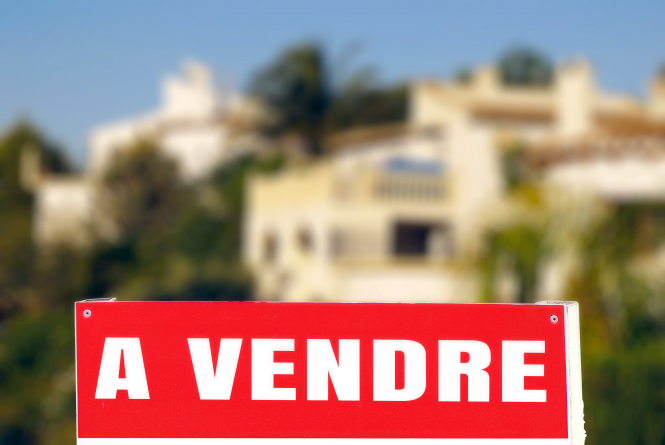 Buying a house without using a real estate agent can seem daunting, but it can be an attractive option when looking for a house in France.

Properties (excluding new builds) were 7.3% more expensive in the first quarter of this year compared to the same period in 2021, according to national statistics agency Insee.

Cutting out the middleman could help save money.

According to Laetitia Caron, general manager of the direct sale of goods Particulier à Particulier, up to 40% of house sales in France are made without an intermediary.

The main motivation is usually to avoid the real estate agent’s commission – an average of 5%.

Commission is often included in the sale price, and agencies sometimes ask sellers to list their properties at the same price. Unless the seller signs an exclusive mandate with an agent, he is free to advertise the property himself at the same time.

“It can also be useful to have direct contact with the seller to obtain objective information. They will know the work carried out and the characteristics of the property.

While buyers may feel better protected from unpleasant surprises by using an agent, it’s not always warranted, Ms. Caron said.

“The notary has a very important role. From the signing of sales agreement (pre-contract), they bring together all the important documents, such as regulatory expertise related to the building. Buyers know they don’t need an extra middleman.

She added that a seller cannot easily back out of a sale once they have accepted an offer in writing.

Of course, most buyers don’t have the specialist knowledge to assess potential problems with a property, but neither do agents, Ms. Caron said.

“If it’s an old house that needs renovating, it might be worth hiring an architect or other professional, whether you’re using an agency or not. They will have knowledge that few agents possess.

Whether or not you use a real estate agency, remember notary fees – about 8% of the purchase price for an old property, or 2% or 3% for a new one.

The notary will retain only a small percentage of these costs because they are mainly made up of taxes.

“Professionals in France have a duty of advice. They must know the property and draw the buyer’s attention to its faults”, he specifies.

If an agent is found guilty of failing to notify the buyer of a major problem, the agent’s insurance will cover repairs.

Agencies also provide access to more properties, many of which are sold without ever being advertised, Allouche added.

Although they charge a commission, they can also facilitate negotiations and ensure that prices remain reasonable.

“An agency that has done its job will make an estimate, and try to reason with the owner to ask him for a price that is not too high. It’s not easy for a foreigner to know a fair price, and you can get ripped off.

“The woman had some knowledge of the French housing system”

Simon Martin already had an advantage when he and his wife moved to Gironde from the UK in 2016.

“My wife, who is part French, had worked as a letting agent in France and therefore had some knowledge of the French housing system,” he said.

The couple visited several properties with estate agents without being caught with any of them. However, they lucked out when they met someone who knew an owner who was forced to sell due to bankruptcy.

Six years later, they haven’t had any major problems, other than the heat pump breaking down three months after its five-year warranty expired.

“The previous owner was not very fond of gardening or DIYbut otherwise everything is fine,” Mr. Martin said.

“My only advice would be to make sure you have a good notary and speak the same language. We had dealt with a notary for various things and thought we had a good one we could trust who would spot any wrongdoing by the seller.

Agents who have since come to the house to try and find bargains are ‘unimpressed’ when they learn the couple did not buy through an estate agent, which Mr Martin said that he could understand.

“If everyone did that, they would go broke.”

“We knew the neighborhood, the system and the notary”

When taking the plunge and buying a property without the help of an agency, it can be helpful to get some local insight.

Charlie Sharpe and his wife Heather bought a house in Bergerac in 1996. They then sold this property and moved to another part of France, but in 2020 decided to return to the area and found a home on the site Leboncoin classified ads.

‘We had just sold our house and had gone through all the hoops,’ Mr Sharpe said.

“We contacted the notary who had sold our previous house in Bergerac. So we knew the region, the system and the notary. Everything fell into place. »

Mr Sharpe estimated they saved 6% by dealing directly with landlords.

“They also had listings with several real estate agents so we could see prices,” he said.

He admitted, however, that the path they decided to take might not be for everyone.

“We bought a fairly modern place. If you are buying an older property, or if you are unfamiliar with the region, or if this is your first purchase in France, it is probably best to go through an intermediary who knows the system.

“I found my house through a dating site”

Paul Gregory paid €70,000 directly to the seller for a house in Haute-Loire in 2016 and said it was “pretty much the best thing I’ve ever done”.

Mr. Gregory, 70, is British but lived for several decades in Germany before deciding to settle in France. He came across the seller on a dating site.

“I thought I could strike up a relationship with a woman that would involve me moving to France,” he said.

“I came across a woman a few years older than me who had a house for sale. She read between the lines and realized that I wanted to buy a house.

After being invited to spend a few weeks at the property that had belonged to the owner’s late mother, the retired translator agreed to buy it.

Although the story doesn’t end in love, there were benefits to dealing directly with the owner.

“She gave me a list of craftsmen I could trust and introduced me to someone from the village who did some work in the house before I arrived, and a lot after I moved in.

“Otherwise, I would never have known this person who has become very precious to me.”

Is it cheaper to sell a French property with a notary or estate agent?