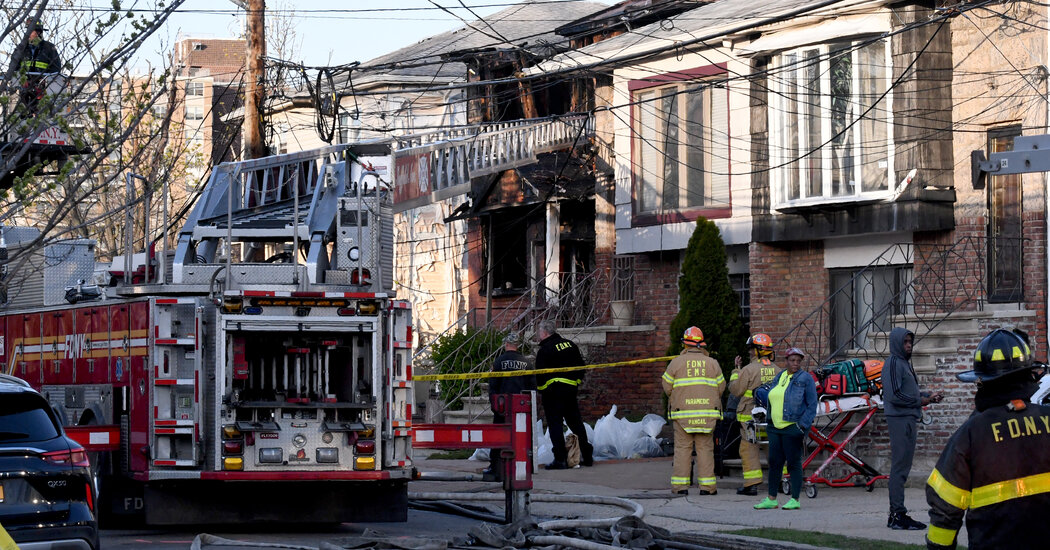 Firefighter is killed when ceiling collapses in Brooklyn home fire

A firefighter was killed after a ceiling gave way in a fire at a Brooklyn home on Sunday afternoon and another person inside the home was also killed, city officials said.

The deceased firefighter, Timothy Klein, 31, of Queens, had worked for the fire department for six years, Mayor Eric Adams said at a press conference later at Brookdale Hospital.

Investigators found another body inside the home Sunday evening but did not publicly identify the person, a city official said. Authorities believe the victim is a 21-year-old autistic man who was reported missing by relatives after the fire, city officials said.

Mr Klein died when the second floor of the two-story Canarsie home was engulfed in flames and the ceiling partially collapsed, firefighters said. He was the second New York firefighter to die in the line of duty this year.

“It pains us and heartbreak to report that New York City has lost one of its bravest, Timothy Klein,” Mr. Adams said. Dozens of uniformed police and firefighters were at the hospital waiting for Mr. Klein’s family.

Mr Adams said the injuries to five firefighters were not considered life-threatening.

The unidentified victim was found after a police dog trained to detect human remains indicated their presence amid the rubble of the fire, officials said. After conducting a risk assessment with building and housing officials, firefighters entered and recovered the body.

Fire investigators have not determined the cause of the fire, which spread to a nearby home.

Fire department officials said they were called to 108-26 Avenue N around 1:40 p.m. and found a private home with a peaked roof in flames. At 2:15 p.m., the fire was raised to a third alarm, drawing more than 100 firefighters to fight the blaze.

Mr Klein’s father was a firefighter and he had other relatives who worked for the fire department, Mr Adams said. Mr Adams said Mr Klein spoke at the funeral of another firefighter, Steven H. Pollard, in 2019.

Mr Klein said he was with Mr Pollard the night he died after falling 50ft from a Brooklyn overpass while responding to a two-car crash. The men were with the same company, Ladder 170 in Canarsie.

At the funeral, Mr. Klein became emotional as he spoke of Mr. Pollard’s sacrifice.

“Steven Pollard died not thinking of himself but trying to help others,” Mr Klein said, his voice cracking. “We lost a true hero that night.”

Mr. Klein graduated from Archbishop Molloy High School in Queens before earning his Bachelor of Science degree in sports management from York College in Pennsylvania, according to his LinkedIn profile. After college, he briefly worked for the New York Rangers’ marketing department, coaching youth basketball on Long Island and at an athletic training center in Manhattan, according to his profile. He joined the fire department in December 2015.

In January, the worst fire in New York in three decades killed 17 people in the Bronx, including eight children. The fire was started by a radiator and quickly filled the 19-story building with smoke.

“I cannot describe the grief of the FDNY today for losing a member doing what our members do best – putting their lives on the line to save others,” she said.

‘It’s more than a choir’: Inclusive and supportive Hampshire community come together in song

Six charged after police probe into organized crime in Hastings