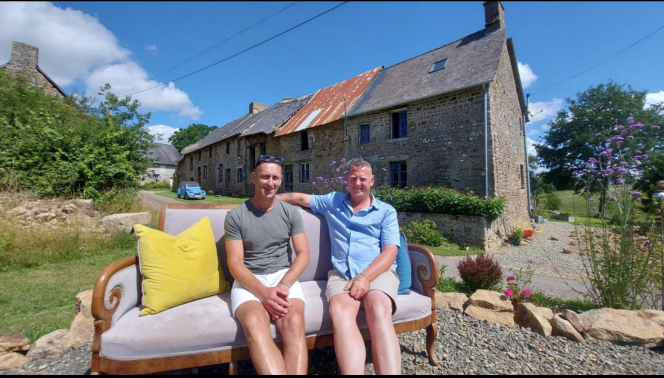 From renting a caravan in the UK to buying an entire French hamlet for €26,000

A British couple have told of a ‘roller coaster’ years in which they went from renting a mobile home in England to owning an entire hamlet of houses in Normandy.

They seized the opportunity and quickly discovered that their new house at the end of the terrace was part of an uninhabited hamlet with a total of six gites, two barns, a workshop, a well, a hayloft, a cider press functional, a communal bread oven, a pigsty. and two acres of land.

La Buslière was once home to workers cultivating the surrounding land, who lived a 40-minute walk from the nearest village and therefore had to become largely self-sufficient.

However, depopulation in the second half of the 20th century meant that most cottages stood empty for the past 30 years.

Saddened by the dilapidated state of the other buildings, Paul and Yip wondered if there was a way to save them.

Faced with an offer they couldn’t refuse, they went ahead with the purchase and set about restoring their new home, in a project that is now the subject of a Channel 4 series.

“We moved in July, and then the fall was good because we were working so hard to get everything done,” they said. The connection.

“Then – I think it could be similar for any country really – but the winter was really long. January and February were pretty dark months, and we struggled to adjust to our lack of language and owning a hamlet after living in a rented trailer,” Yip said.

“It was very overwhelming.

“We were really happy some days, but then we wondered if we could do it,” added Paul. “It was a roller coaster.

“And we feel a certain sense of responsibility. We bought the rest of the buildings because we feel passionate about saving them, and so there is pressure. But we never thought we had made a mistake moving to France; it’s the best thing we’ve ever done.

“Although we didn’t do anything else with the other cottages, we got our house and the other buildings for £26,000, less than a down payment on a house in the UK!”

“We will never pay rent again and that’s huge for us.”

From abandoned village to holiday destination

Their plan is now to restore the other buildings to create a holiday destination with a guesthouse and glamping facilities. “We want to share this beautiful space with people,” Yip said.

“We have now removed all vegetation from the buildings,” they said. “We discovered buildings and piggeries and all kinds.”

While the cottages still need a lot of work, Paul and Yip hope to welcome their first guests in a few weeks, and will offer stays in a “vintage horse box truck” which they first transformed into a place of living in the UK.

“We’re really proud of the work we’ve done on this truck,” they said. “In the morning, when the sun is shining and we close both doors, it’s just beautiful. We want to share it with others.

The truck will be served by a utility building, of which Paul has just finished redoing the roof using “a few YouTube clips” and advice from a friend.

“It’s no small task; we had never touched a roof before,” the couple said. “Laying the last tile really made us feel emotional.

Across the site, “we did 98% of all the work ourselves.

“When we have the truck running, I’m going to go into the bread oven and turn it into a kitchen area,” Paul added. I could do pizza nights or guests can rent it out, and I think it will be an integral part of the business.

The project will require funding beyond Paul and Yip’s savings, so the couple have started a GoFundMe page for anyone wishing to contribute.

Finding traces of the past

One of the most important aspects of Paul and Yip’s work on the village has been to embrace the past while ushering in a new era in the history of the hamlet.

Paul said, “It’s very important to us to get things back the way they are,” and Yip added, “When we cleaned up the attic spaces and went right into the eaves, cleaned the hay and the animal feces, we have on a few times, I found a child’s shoe.

“We were told it was a tradition to put a shoe in the wall to ward off evil spirits, so we made sure to put them back.

“A lot of our work here is not restoring but deconstructing, tearing things out to uncover beautiful original features.

“The best thing we found was when we peeled off horrible wet plaster to find some amazing stones going up our staircase. We saw this huge stone right in the middle and wondered where this slab came from Stonehenge-like!

“We have a fireplace in the cottage next door which, according to our cameraman – who is an archeology and history enthusiast – bears Norman carvings, over 950 years old.

“We haven’t found any old gold or anything like that, but we’re still keeping our fingers crossed for something to help the roof!”

The couple’s presence in the hamlet also seems to bring back memories to locals, many of whom have “only known this place as a place ravaged by nature for 30 years.

“We were visited here by a lady who still lives in the neighboring village. She came with her daughter and her grandson and they walked around to see how we were doing. She lived in one of the cottages and got married in our barn.

“The history here is incredible. We are just a blot in the history of these buildings and we feel privileged to be part of it.

Constantly feeling like they are walking in the footsteps of past generations, Paul and Yip are eager to hear from local historians or people who know the area, who might be able to give them more information or show them photographs of the hamlet. the story.

‘Grateful’ for the opportunities France has provided

“In England we lived on a friend’s farm and rented a static mobile home,” said Paul and Yip, adding that they wanted to start a small business with their converted horse box, but were “addicted other people’s land, which often does not have water or electricity.

“It was a frustration for us for many years. France has not only realized the dream of owning your own home, but also the dream of starting a small business.

“We didn’t come here to make a lot of money; we would just be happy if people could come here and enjoy it, and we could have an income.

“We came to France for a better quality of life, and simply to enjoy things more. We are really grateful that France gave us an opportunity that England couldn’t.

The couple were also touched by the welcome they received from their new neighbours, Paul said: “There is a French family farming all around us and they have been very helpful. They invited us to their home; we’re still up there having dinner. It’s an honor.

“A lot of people will ask us: ‘How were you received by the French?’ but since the day our French neighbors offered their help, we are really very grateful to them.

The biggest challenge for both of them was learning the language.

“When we got here we could probably say two words in French, so it was very difficult because we’re both used to communicating very effectively in the UK,” Yip said.

A restoration that comes to life on screen

Paul and Yip’s move and ongoing project were featured on the series Help! We bought a village, which also follows several other couples scattered throughout Europe.

“People see the journey pretty immediately,” Yip said, “from the day we moved here to where we are now. Hopefully it follows us all the way.

“Trying to adjust to someone following you and having to talk about what you’re doing is kind of weird, but it’s been fun.

“We were worried about how we were going to meet, but [the programme] is absolutely awesome and a true representation of us. And that’s largely thanks to the people behind the camera, who made it easy for us.

What to do if structural cracks appear in your French property

Tips for Staying Safe in Miami Beach for the First Time

Real Estate in Metro Vancouver: The Nine Most Expensive Homes