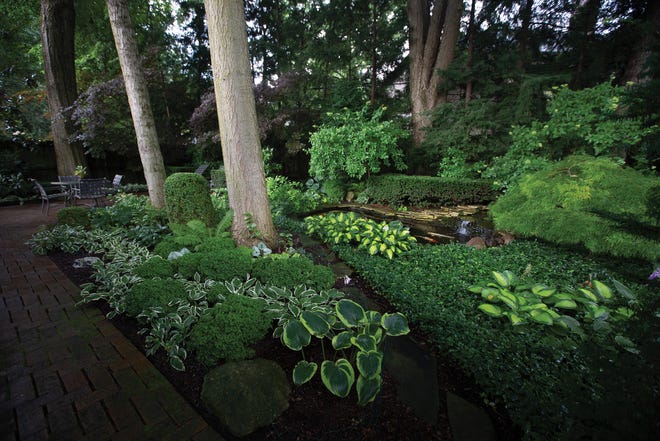 “My sensibilities go to the front bed so methodically kept, but I really appreciate that the rear is very planned but still very natural,” says Cathy, Director of Sales and Marketing at Contemporary Art Matters gallery, founded by his cousin Rebecca Ibel. Cathy is also president of the Little Garden Club of Columbus.

Built in 1953, the traditional Williards home was contemporary extended in 1975 during Les Wexner and his mother Bella’s tenure in residence. Wexner commissioned modernist architect Byron Ireland to renovate the dwelling and design the addition of a sunroom overlooking the wooded backyard. (Ireland is known to many for its design of historic downtown Ohio north of downtown.) In 2003, subsequent owners added extensive gardens, including the front courtyard garden and shaded garden. lush at the back. A two-level pond has been laid out under the property‘s mature maple, cherry and hackberry trees. Stacked limestone lines the pond and a waterfall cascades over a stone ledge from the upper level. Layers of lush green perennials and evergreen shrubs surround the pond.

When orthopedic consultant Cathy and Steve bought their home in Sessions Village in 2012, Cathy says they “inherited” this impressive garden and really had to step up their gardening skills.

“We didn’t know exactly what we were getting into,” she says.

Still, the couple warmly embraced the opportunity. Steve learned through research and hands-on experience, while Cathy joined the Little Garden Club of Columbus to gain wisdom from guest speakers, garden tours, and other club members. Ten years later, they have both become garden aficionados.

Steve takes care of daily chores and works with arborists to manage tree maintenance. And together they tackle new projects such as the reconstruction of the pond.

“It was a big deal,” Cathy laughs. She remembers how they had to dismantle the stones in their limited space and had differing opinions on how to proceed.

“He did a lot of heavy lifting and was a lot more methodical,” she says, admitting he ended up getting the job done.

As an unexpected bonus, they discovered an unused filtration system during the renovation that now keeps the pond water clearer.

“We’ve started using it, and it’s been a game-changer,” says Cathy. “Now you can see straight into the water and enjoy the beauty of the fish.”

Over the years, they both waded into the pond to tend to the fish. Once they even climbed up to catch an overgrown koi which was then moved to a friend’s pond.

“It was pretty hilarious,” Cathy says. “We both jumped into deep cold water to try to capture it.”

Cathy says Steve has since become the unofficial “pond guy” for Sessions Village and helps neighbors with their water features while not wearing waders, just an old bathing suit.

For Cathy, she attributes much of her growing passion for the garden to her involvement with the Little Garden Club of Columbus. “The timing was good since I had the responsibility to take care of this garden that we inherited,” she says.

She joined the gardening club at the invitation of a neighbor shortly after buying her house. Then she immediately stepped into a leadership role as head of the awards committee. The garden club, founded in 1961, is affiliated with the Garden Club of America and supports numerous beautification, conservation and community garden projects across the city. They include Capital Square Gardens, Park of Roses, Audubon Center, Franklinton Farms, Highland Youth Garden and more. Cathy is now president of the club and will represent her members at the 2022 GCA National Convention in New Jersey this spring. In 2023, Columbus will host the GCA National Convention.

In her own garden, Cathy enjoys running the garden club and, with Steve, entertains small groups in the garden or indoors with a view of the outdoor oasis.

Whether you stroll through the garden, sit on the brick patio or watch it from the solarium, the garden shines all year round. In the spring, azaleas and rhododendrons bloom pink and purple. A cast of flowering perennials such as Solomon’s seal and brunnera add more delicate blooms. In the summer, their foliage stands out alongside other green perennials like variegated hostas and feathery ferns. A large magnolia by the patio delights with its glossy leaves and classic white flowers. In the fall, the colorful Japanese maples steal the show. Even in winter, the garden impresses with its evergreen yews, box trees and central pond, all enhanced by a layer of snow and landscape lighting.

As the property matures, the garden only gets better.

“We love the garden we inherited and want to retain and honor the original design,” says Cathy.

This story is from the Spring/Summer 2022 issue of Home & Garden.