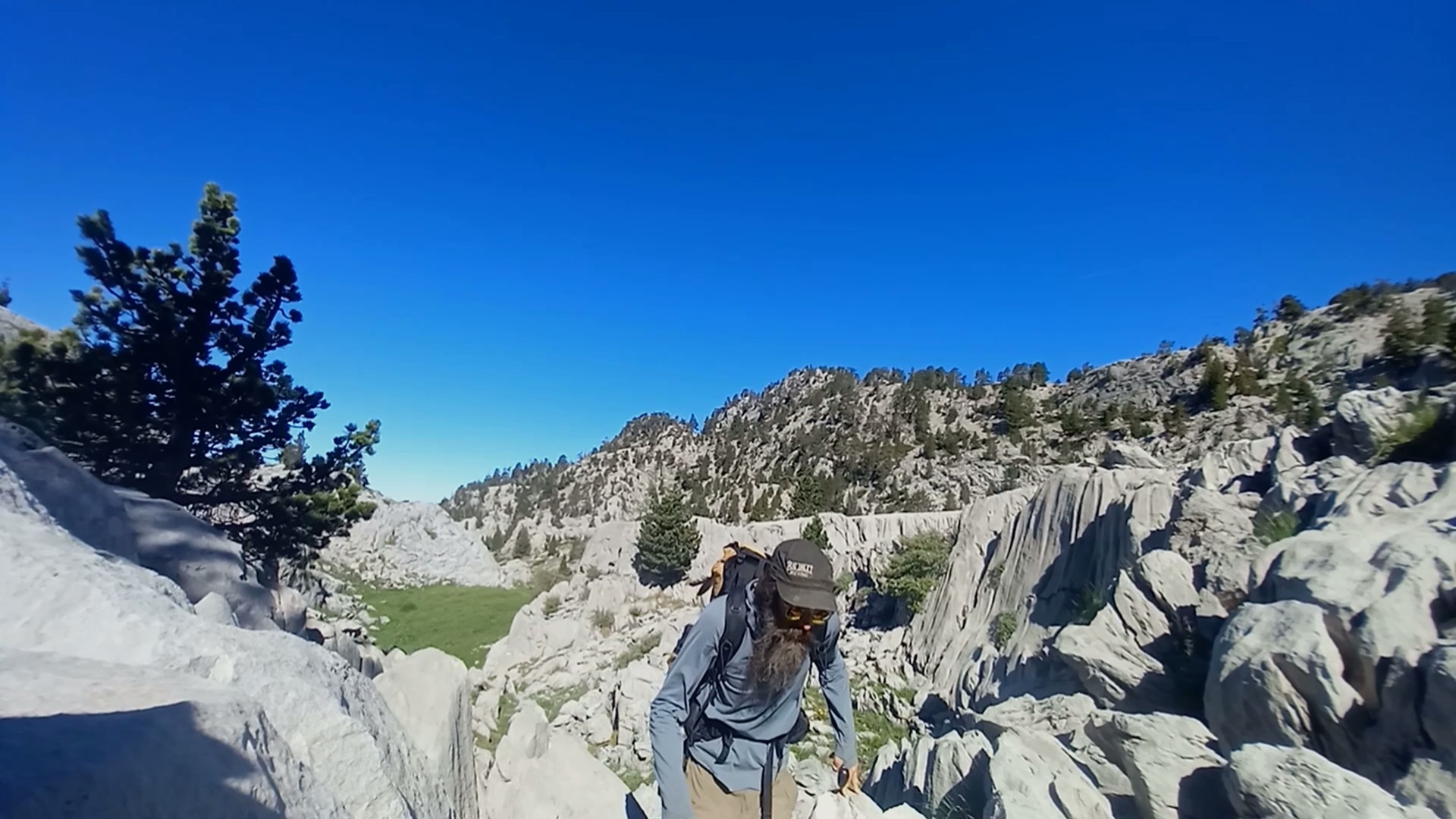 Having never blogged before, I’m starting to realize that taking notes from day to day is important, and keeping track of posts is essential.

I’m moving to higher mountains and more rural hamlets, so finding an internet connection is getting harder and harder. I was unable to get a SIM card for my phone due to company contract stipulations, so these updates will be less and less from now on.

For now though, I have a few days to cover for you dear readers. It was a week filled with adventures without a doubt.

We camped in an abandoned, slightly haunted lot near the cathedral with a curious herd of cows that threatened to randomly rush and trample us in our tents at any random spooky noise.

The wind was strong and the temperature dropped, creating ideal conditions for the mountain mist so common in this region.

Much of the first half of the day would be spent hiking “Bob Ross” with happy little trees and painting your own views.

I started first, returning to the tracks of the Roncesvalles pass, but this time with no one else coming down from St. Jean Pied a Port (I would pass 3 past the top of the pass before splitting the Camino Frances) . 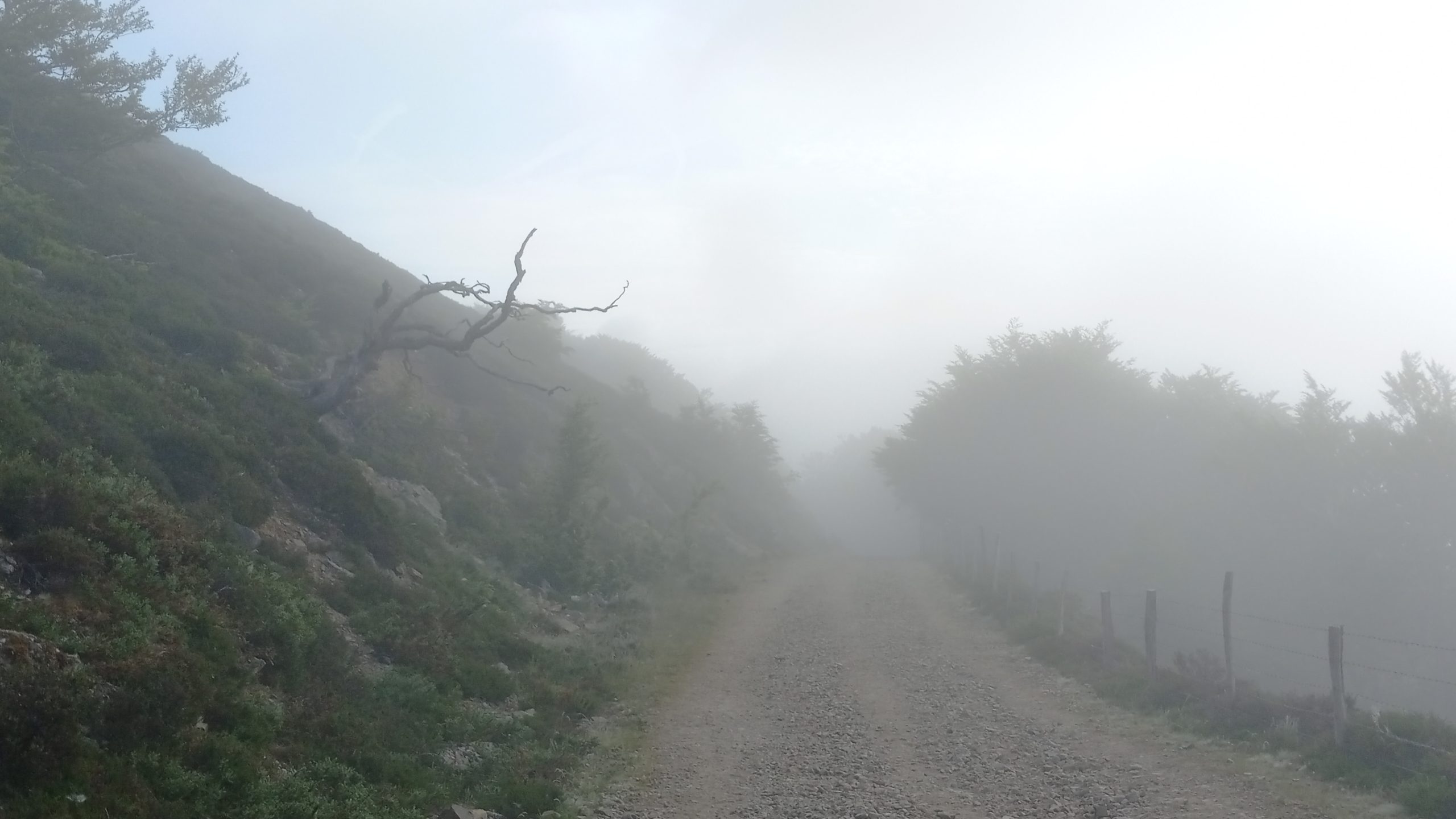 The long climb led through mystical fog-filled patches of forest and open grassy hills. Sometimes the early morning wind and sun broke through the mist and the altitude made me feel like I was on an island in an ocean of clouds below. 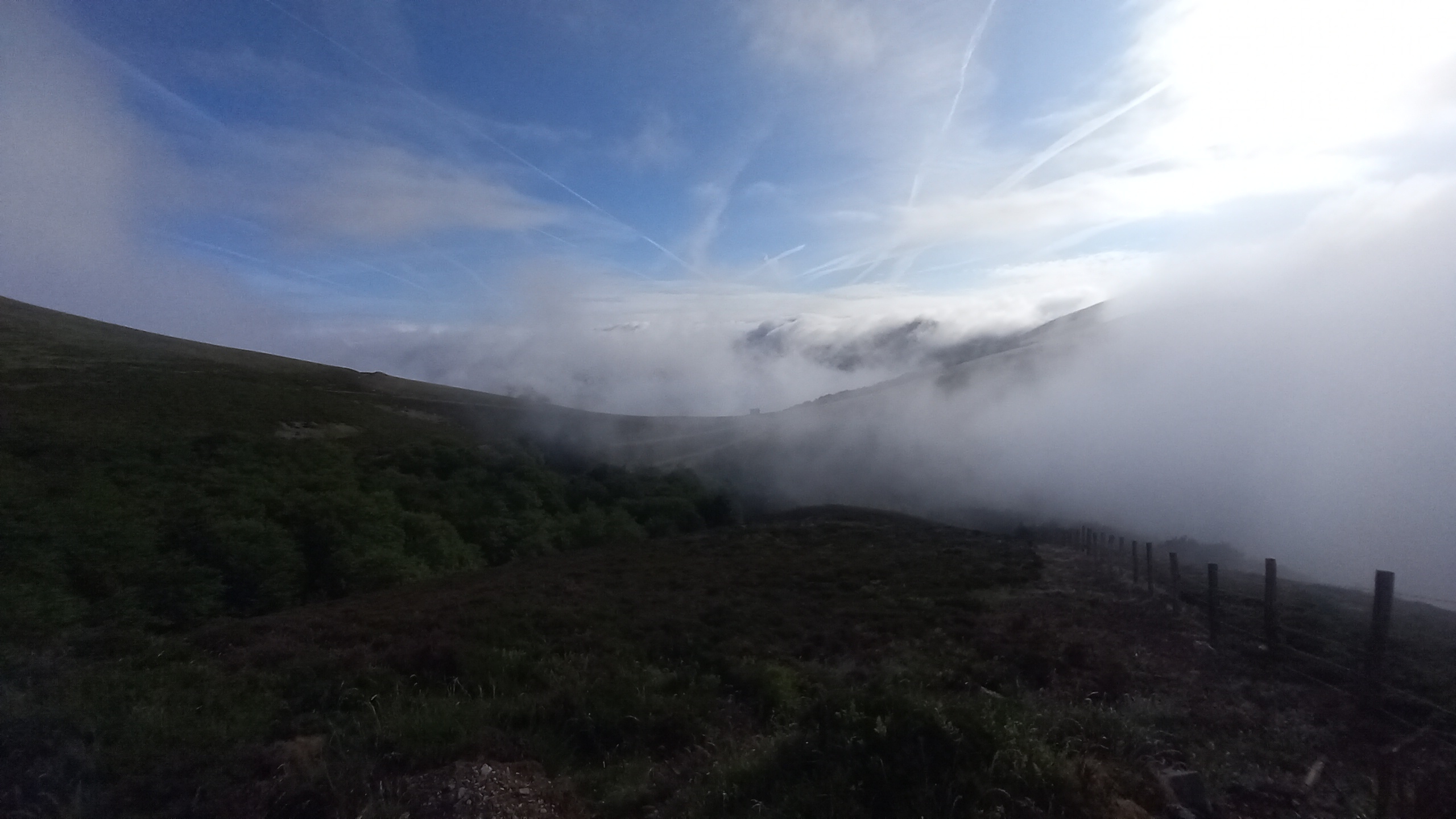 Much of the first half of the day would be spent hiking “Bob Ross” with happy little trees and painting your own views. After a dirt road, the road undulated along hills and ridges with little gain or descent.

At one point there was supposed to be an “easy to find near the road” stone circle but the fog was so thick I didn’t see it. Instead, I found a green metallic shepherd’s hideaway for lunch sheltered from the elements.

A little later the trail dipped steeply into a valley and out of the mist came a chain of about 20 hikers climbing in the other direction. I had trouble finding the faded path so the view was welcome. The fog was so thick that as I quietly filmed the eerie sight, none of them saw me standing nearby. After they passed, I laughed and walked down to the creek where I took a nap on the bridge and waited for Johan. 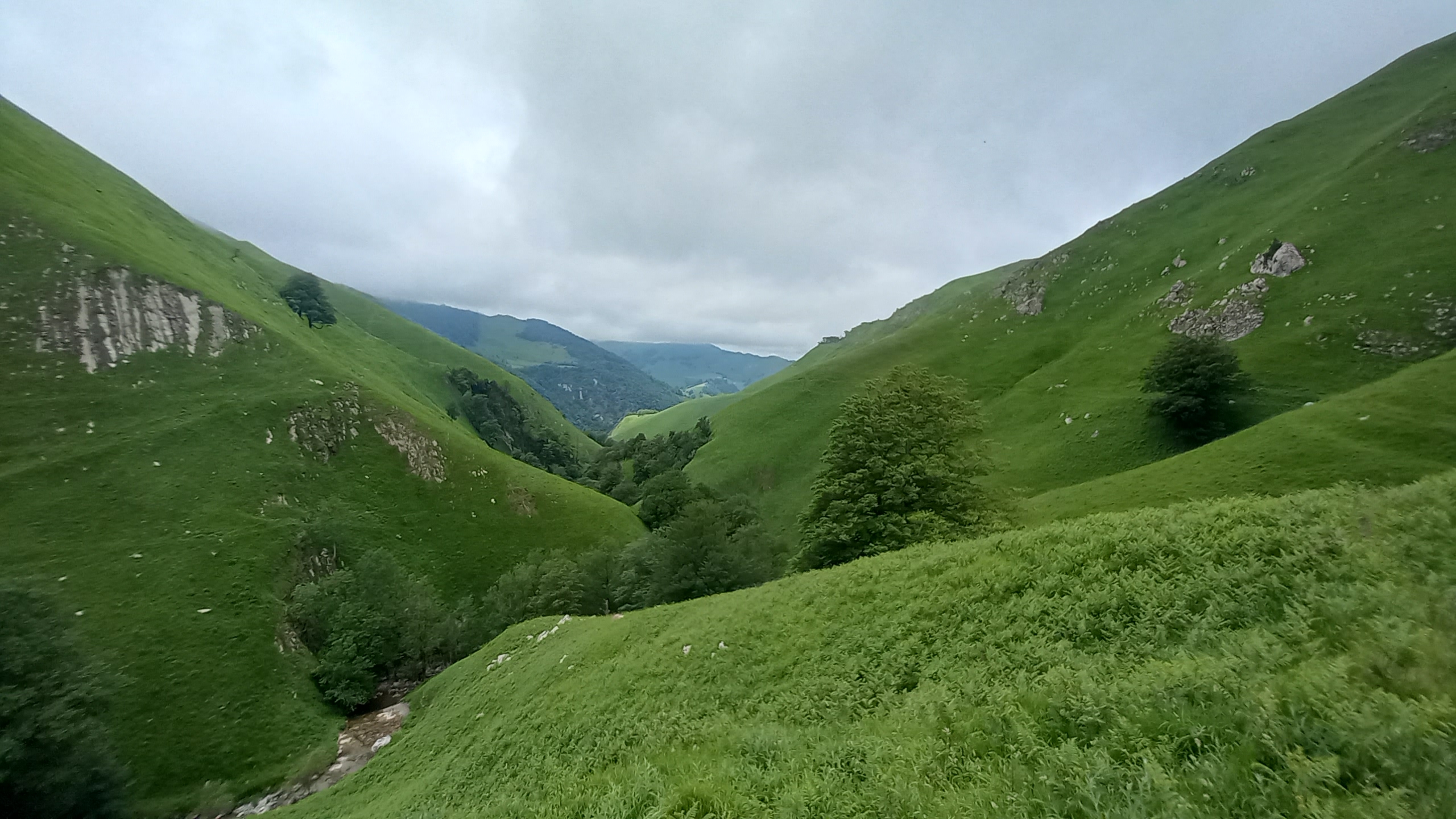 I waited an hour or two and just as I started the steep climb, after the first switchback, I saw my hiking buddy not far behind. At the top of the pass, I befriended some horses and waited for him to catch me. 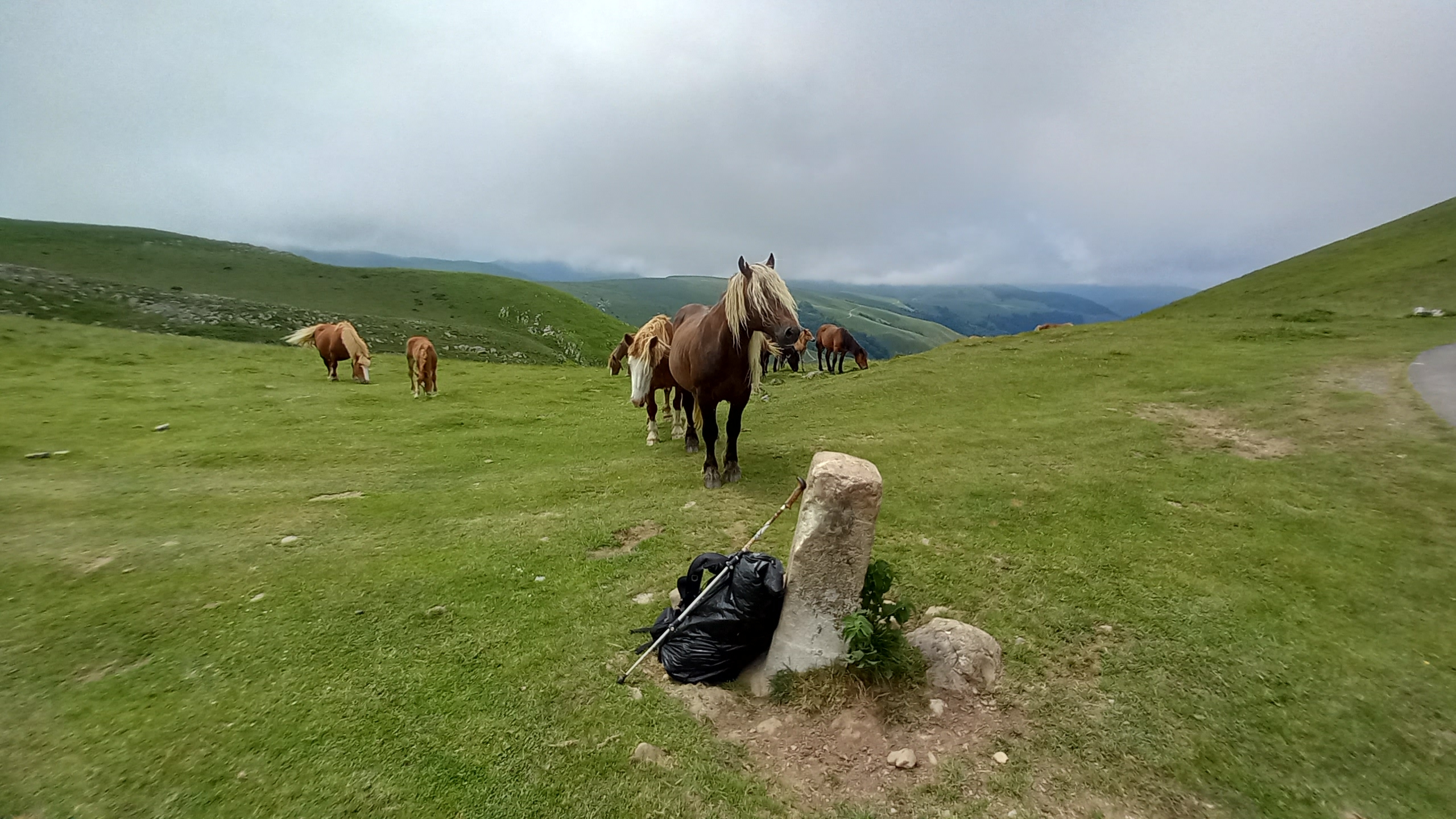 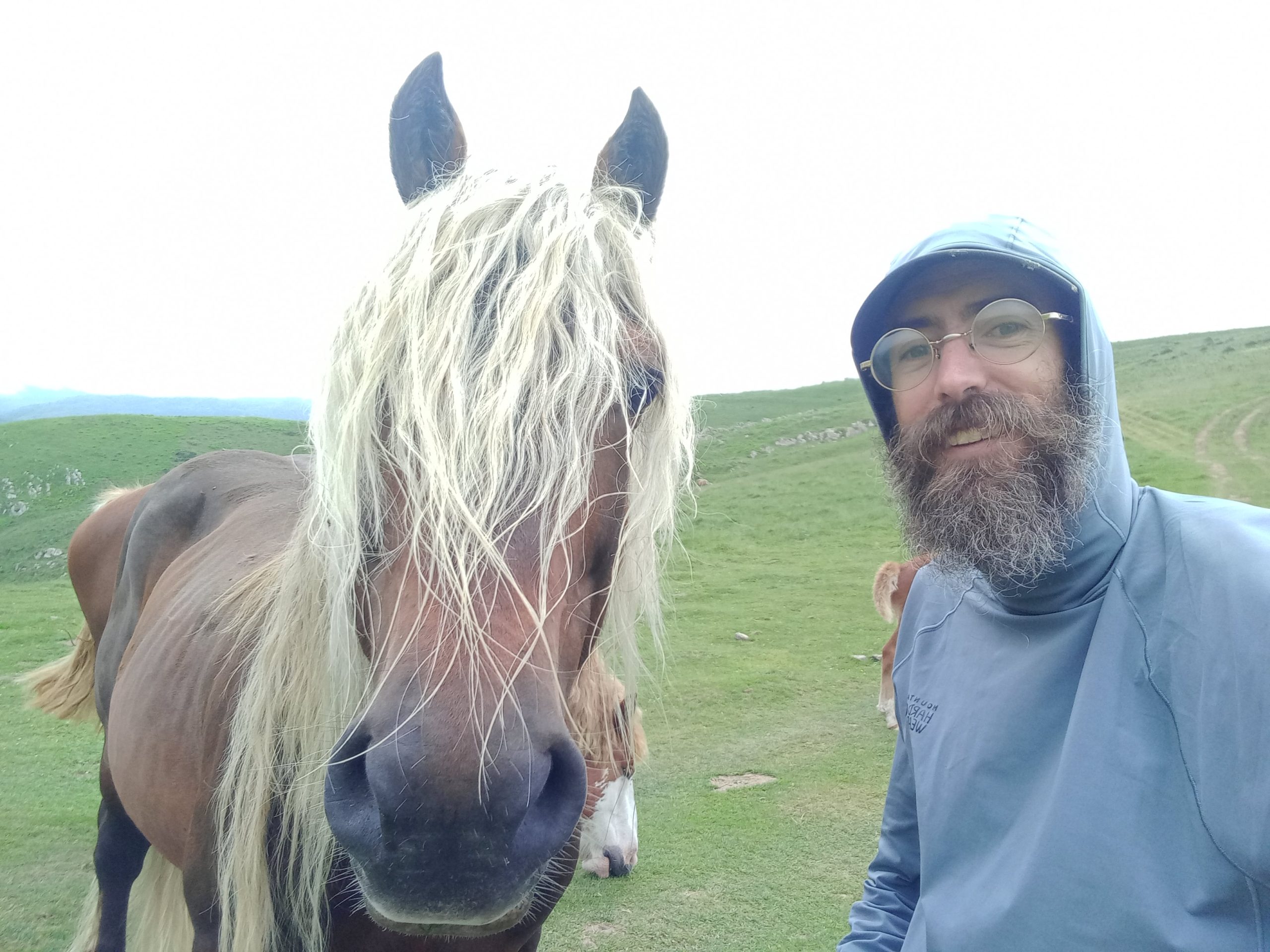 The last half of the day turned into a beautiful clear afternoon. After a short and easy descent, we found our site next to a stream and an abandoned hut locked in the valley floor. 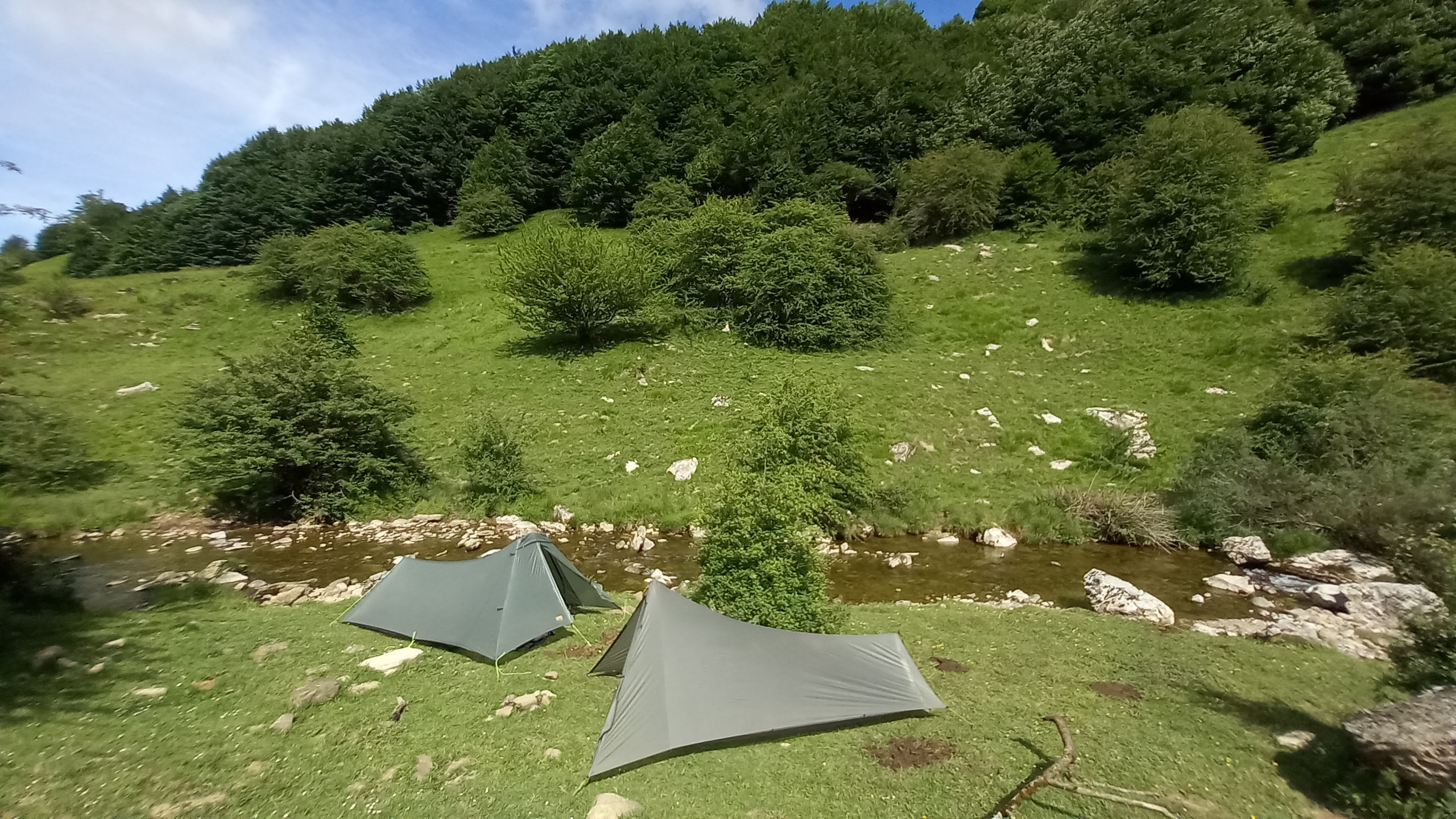 The mist returned overnight, but not as thick. The day started with a very steep climb to regain altitude, without trails or markings. At the top, there were small posts marked GR which followed the contour, more or less, for a few kilometers. 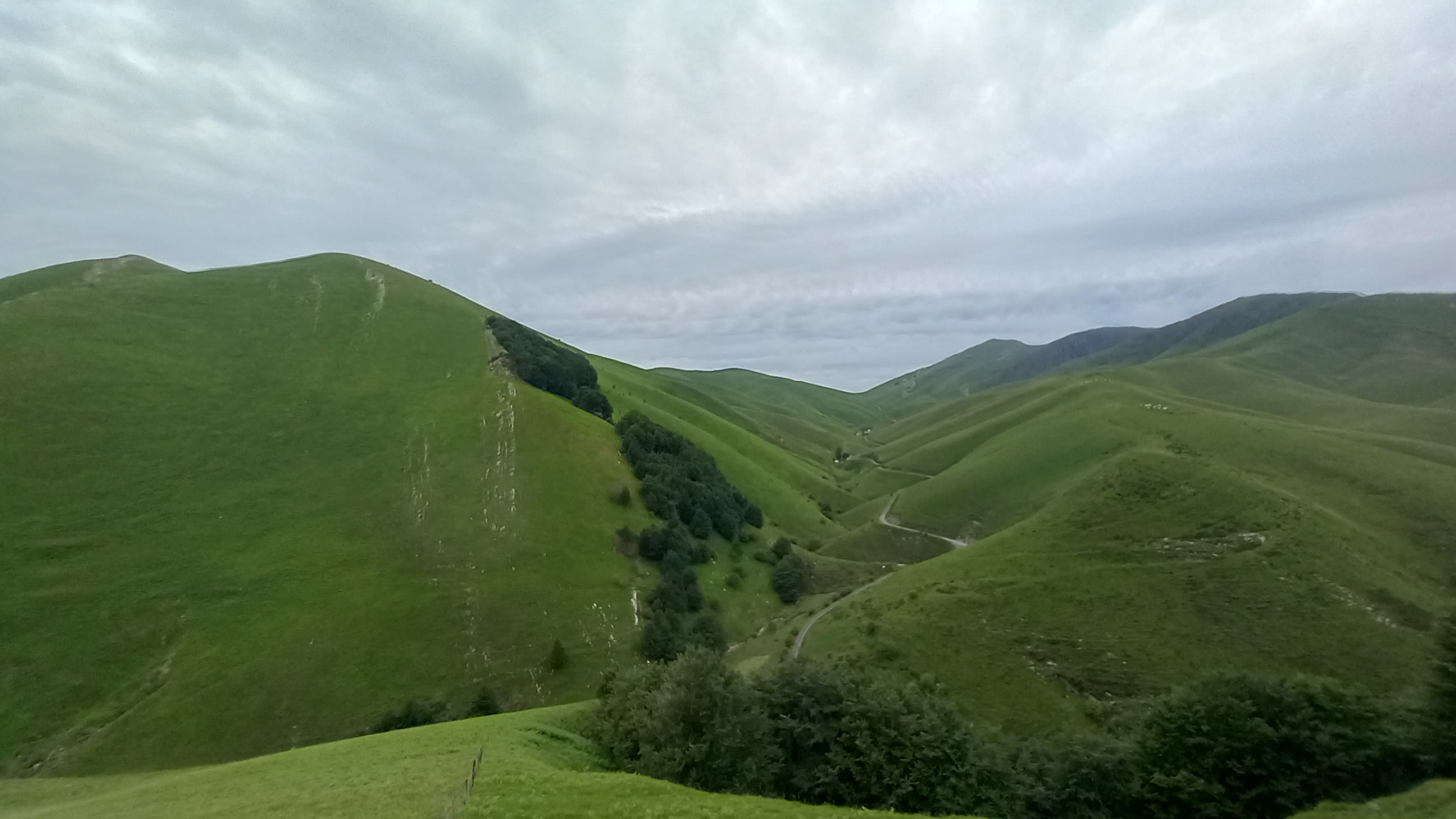 At the top of the gain, our trail rejoined the GR10 at the Okabe Cromlechs, a mysterious set of ancient stone circles. I guess a battle happened on the pass, it seemed like an epic place to have one in ancient times. 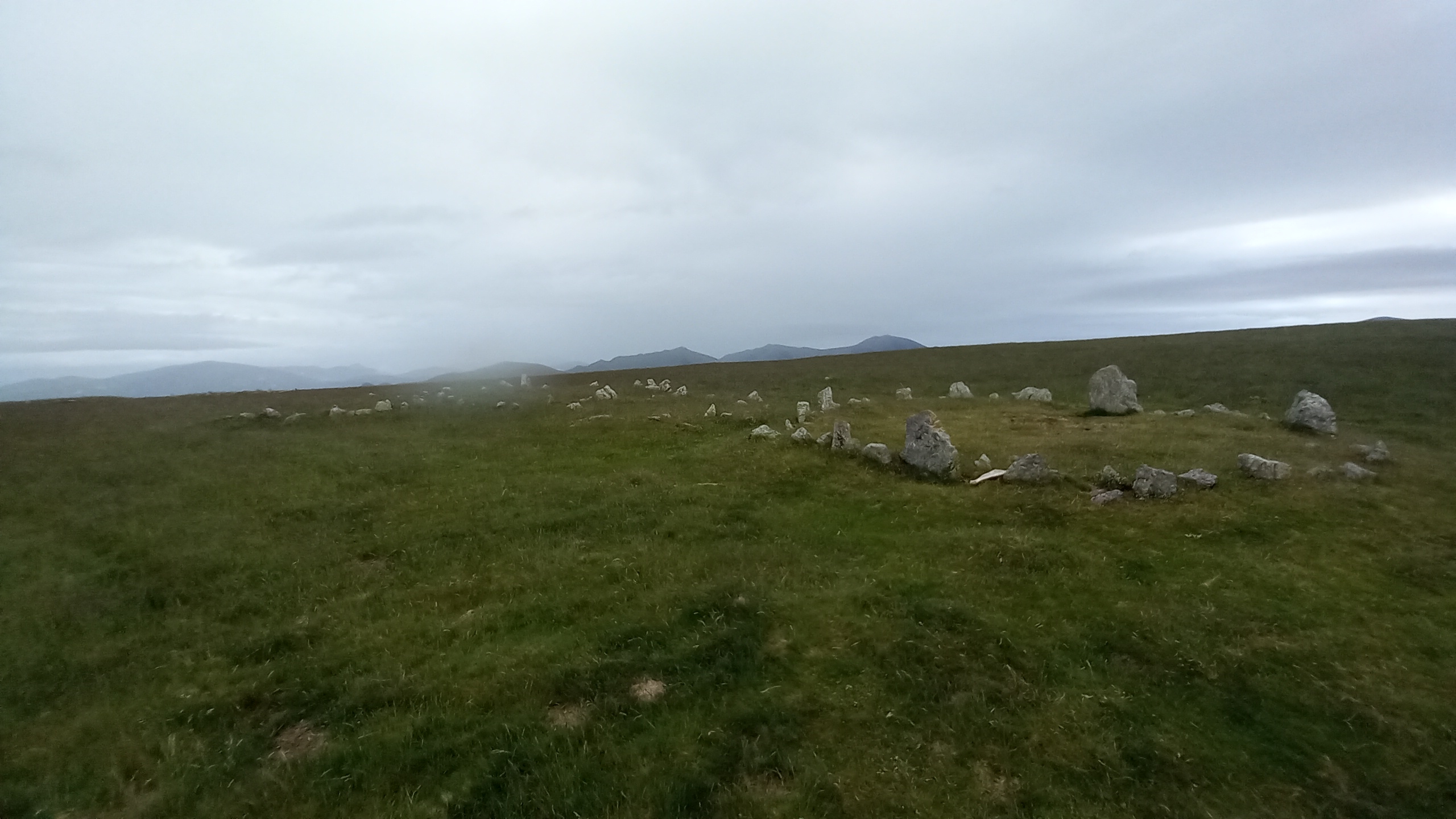 The trail then went through the Iraty forest to a small tourist campsite with a cafe and two closed restaurants.

We stopped for a coffee and a short connection to the outside world through the wonder of wifi, watching a light rain start. Picking our window of opportunity, we set off to regain altitude, climbing through a peaceful beech forest. On the way out, I found a bow to hunt, but decided my chances and we didn’t need to be great, so I left it at the cafe. 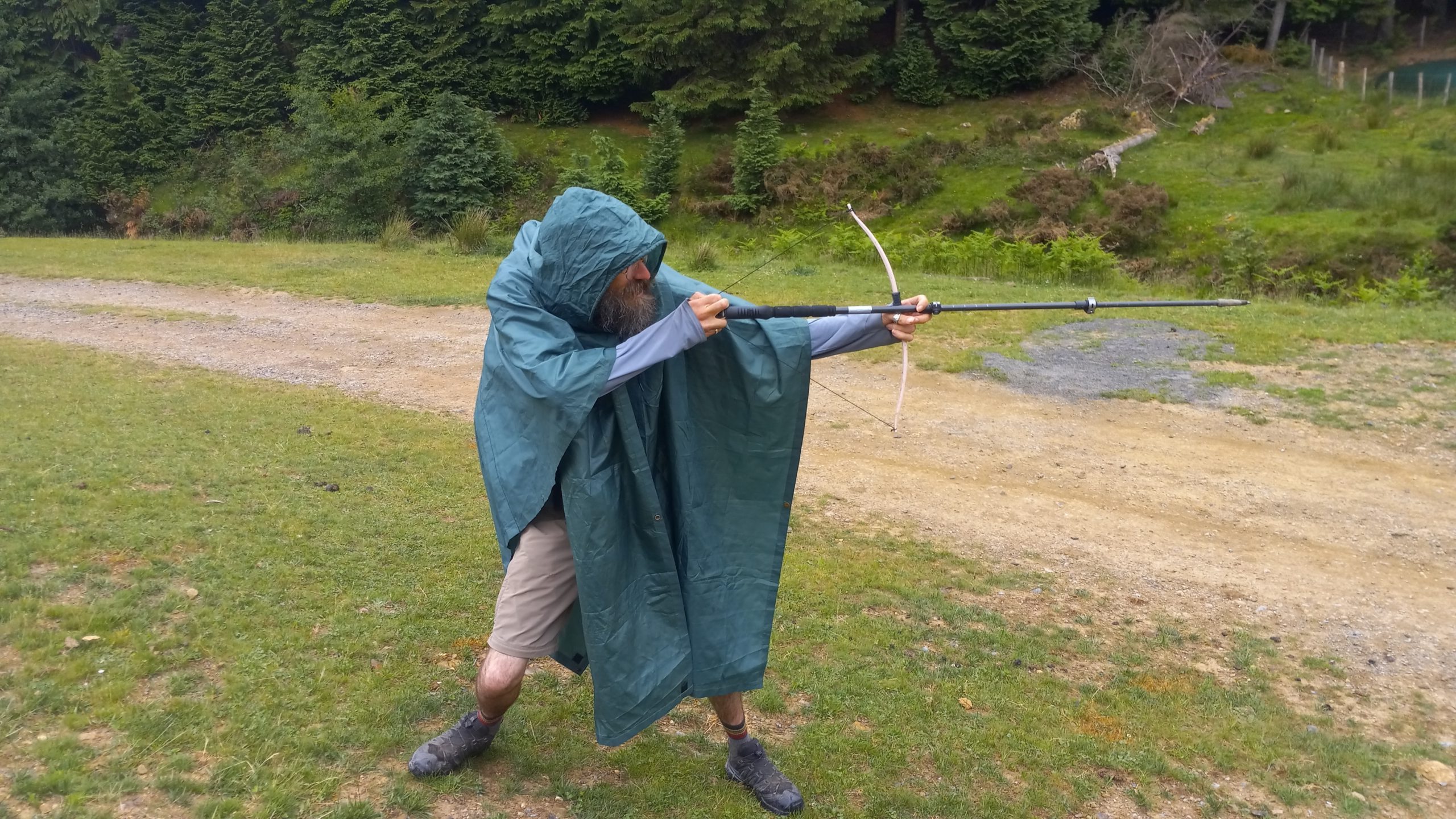 Shortly after leaving the cafe, we arrived at Col Bagargui where there was a small store, and we were both badly in need of a restock. We gratefully stocked up and by then the wind was getting stronger and the humid fog was getting wetter.

The decision was made to pay the €15 for the beds in the gite rather than the tent camp and we joined about 15 other hikers taking refuge from the bad weather. There was one chessboard with most of the pieces, so Johan and I played four games, only one of which I won. I need to improve my game.

We were really hoping the weather would clear up in the morning as there was a peak ahead with sketchy ridge walks and great promising views. It was a bit, it wasn’t as foggy but it wasn’t clear either.

We left and followed a dirt road for a while, then attempted to follow the trail and start climbing Orhi Peak. I forgot to keep an eye on my GPS and we ended up taking a wrong turn following a set of markers for a different GR. This was easily solved by going up and over a small shoulder, but resulted in very wet feet from the dew covered grass.

For the first mile or 3 the views opened up nicely occasionally showing the deep fertile valleys below. 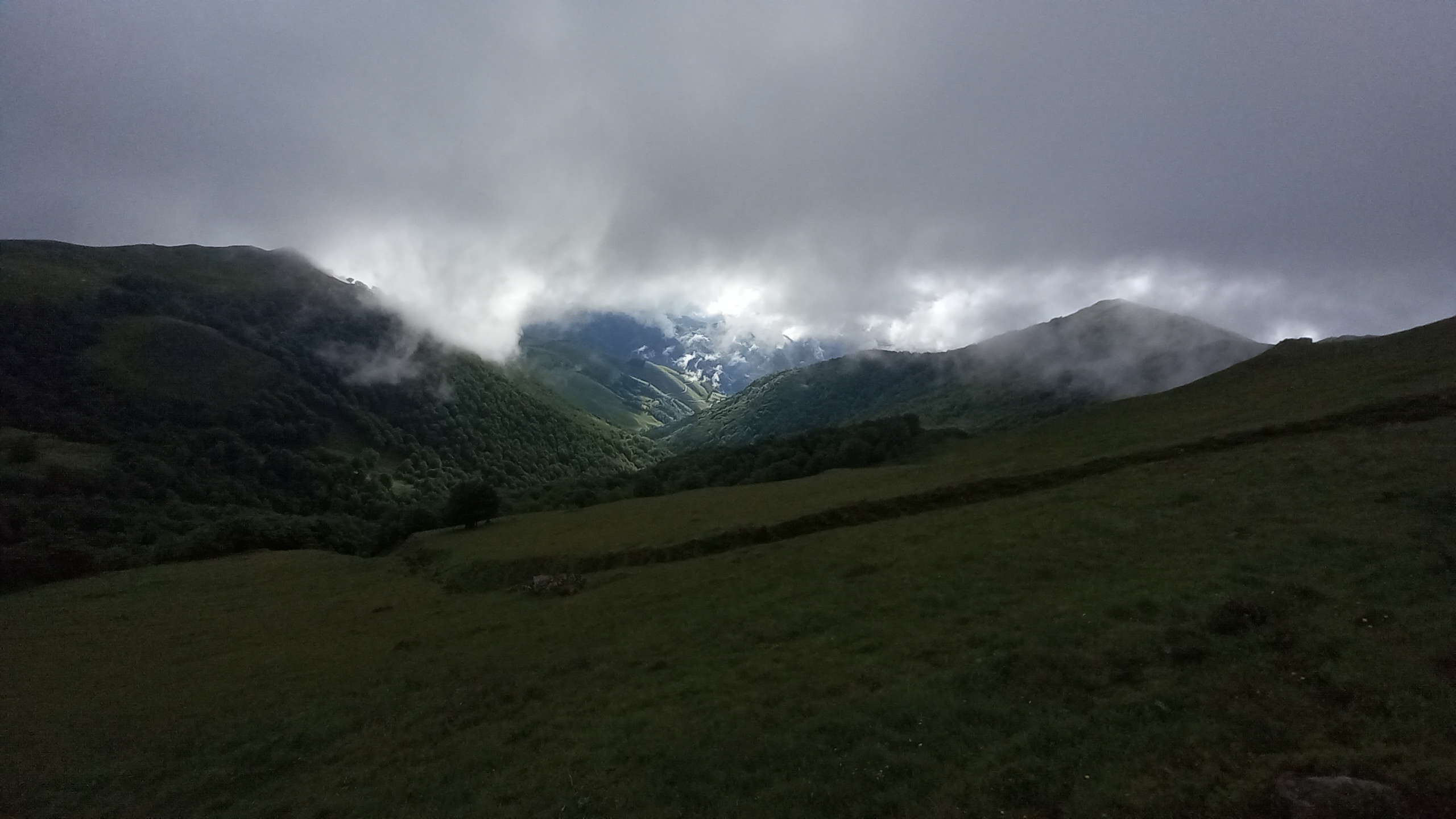 Then the real summit ascent started and it was in the cloud. The wind was howling along the ridges, easily sustained at 50mph with stronger gusts threatening to push us over the edge of the rocky cliffs below.

When I faced the prospect of having to cross the knife edge in this wind for the first time in a long time, I was truly scared.

At one point we stayed on the ridge when the path dropped slightly to go around a dangerously narrow section of the ridge line. When I faced the prospect of having to cross the knife edge in this wind for the first time in a long time, I was truly scared. I turned around and shook my head ‘no’, we checked the GPS and realized we were slightly off so we backed up to find the safe passage. 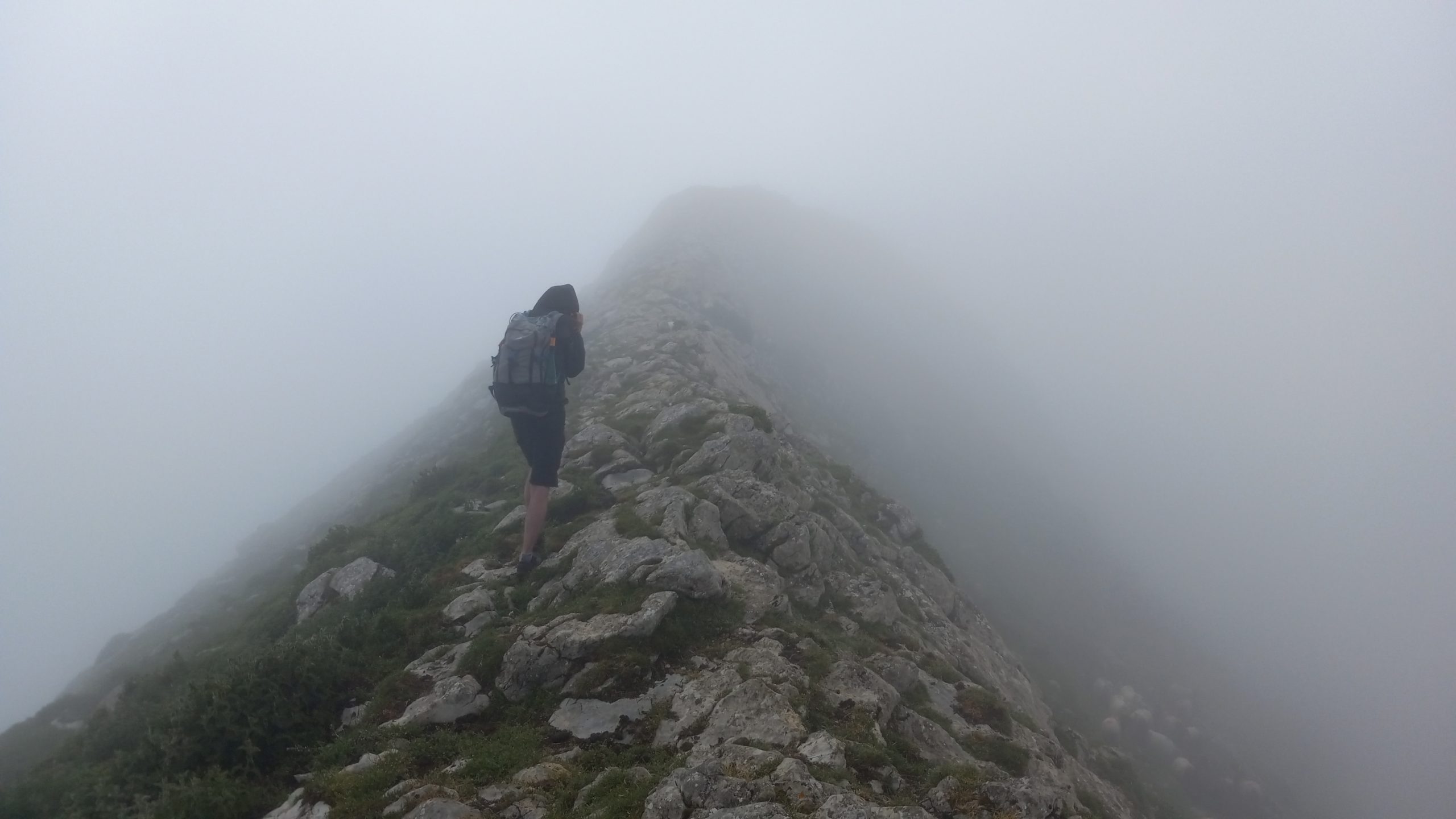 We made it to the top safely but didn’t stay longer than a few moments due to the inhospitable conditions. A few hours later, the skies have cleared for the most part, but it doesn’t appear that will ever be the case on Orhi.

The path looped around the ridges for about five miles with the sun shining, but the cold wind was still blowing hard. Eventually the single track led to a double track that descended into a protected valley and the recommended destination for the day, the unmanned refuge of Ardane: 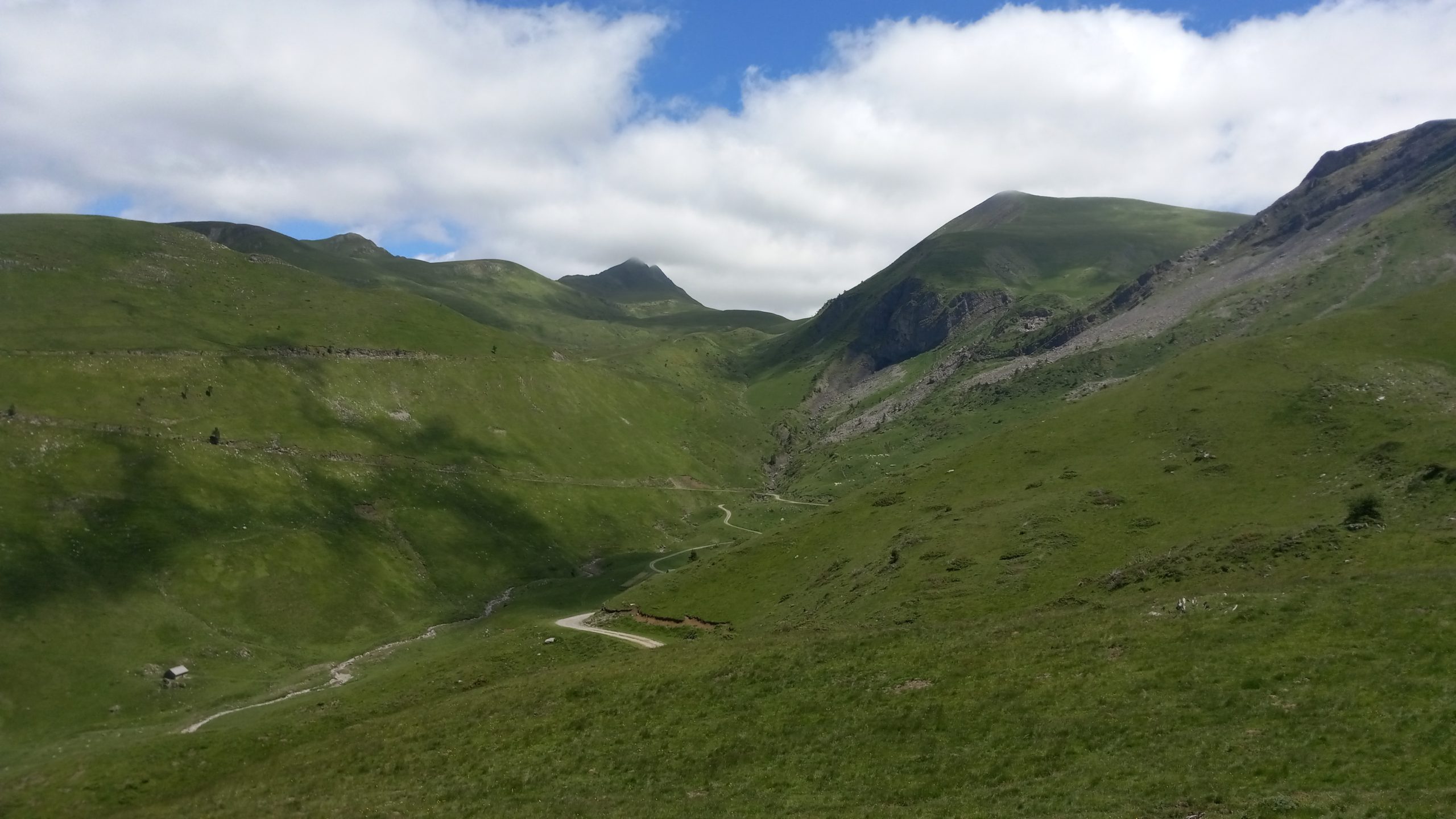 It was so early that after a short consultation we decided to continue for about 6 miles to get another long ascent and steep descent out of the way and do a day hike from the town of Lescun.

We started down a long, gradual dirt road that turned into a single track as we reached the pass. The next few miles followed a contour usually traversed by three small valleys and two small cols, a great afternoon hike. 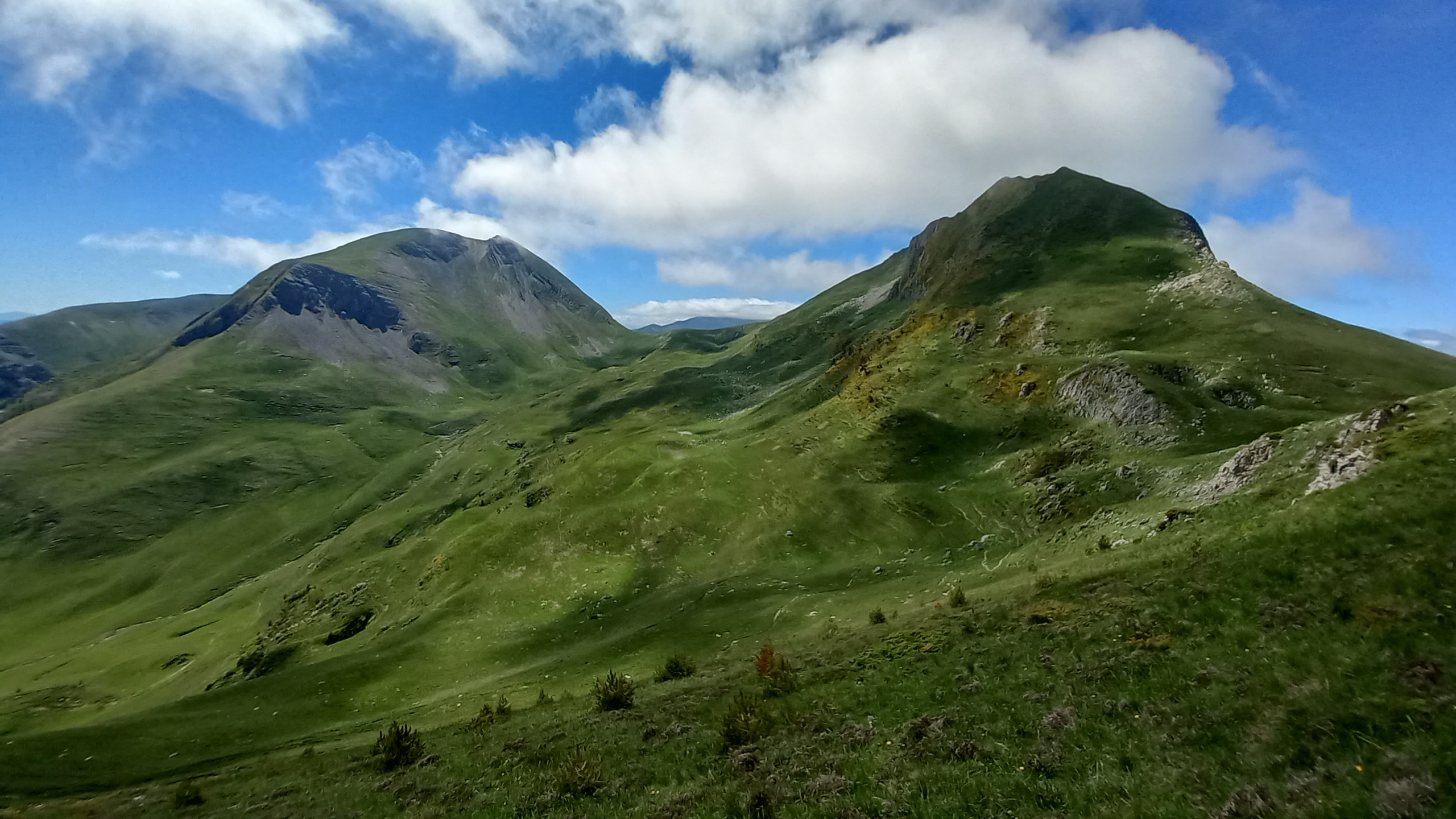 Over the final pass, the view opened up to the high peaks we would enter the next day. I got off and stopped at the refuge bar to have a cervesa and wait for Johan to catch up with me. 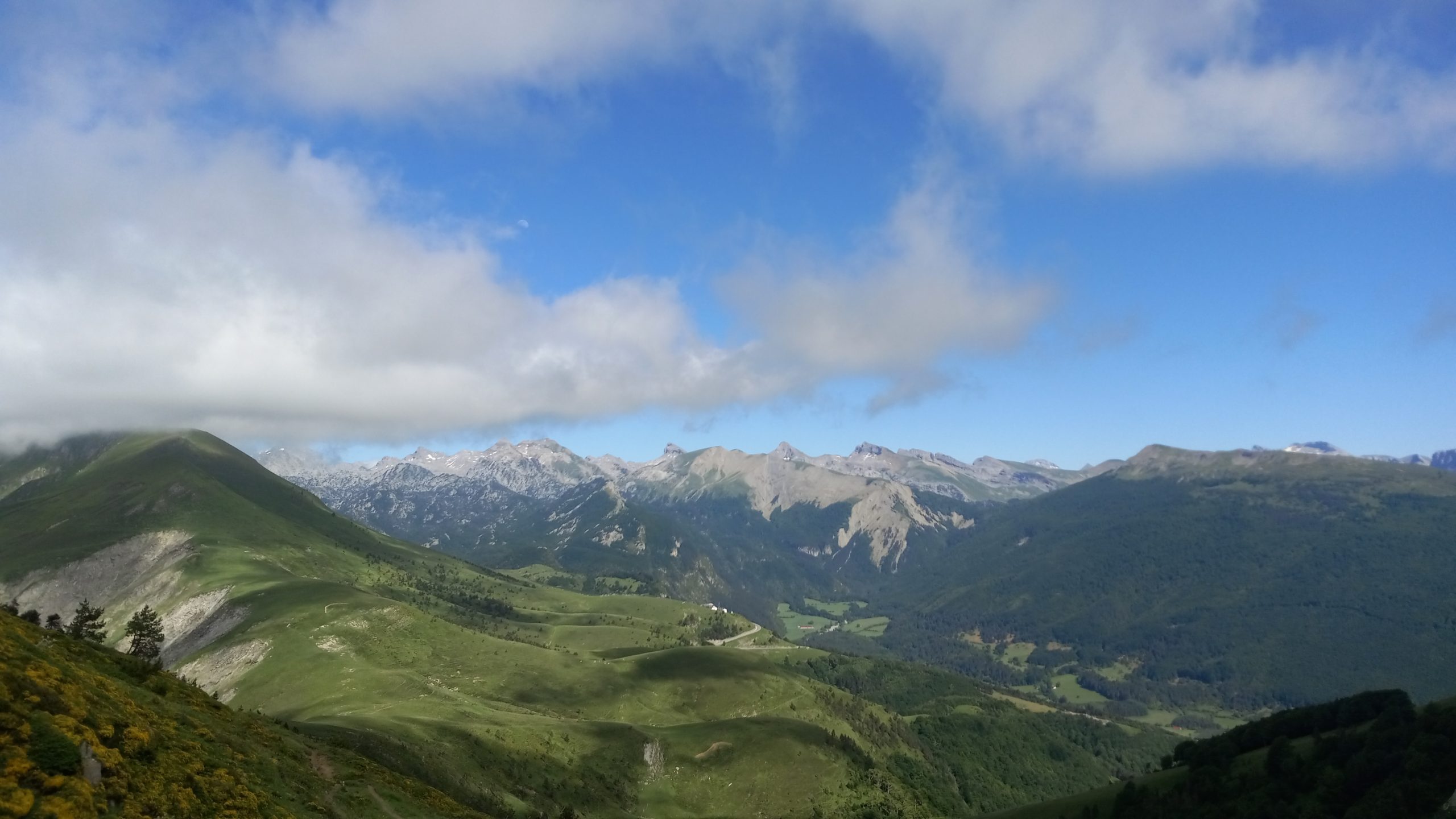 We hiked a short distance and found a nice spot on the edge of the woods away from the eyes of the road and prying eyes (wild camping in Spain is technically illegal.)

The first thing I noticed when I woke up was that there is no condensation in my tent, “excellent” I think. The next thing I noticed after opening the vestibule was the sun in the trees and not a cloud in the sky, “WHOOP WHOOP!” I exclaimed.

The start of the day led through a beautiful shade forest. At one point I stopped to take a picture of a tiger salamander and at the same time a beautiful woman appeared out of nowhere. I pointed out the natural treasure I had found and she sighed lovingly, then continued without another word. For the next hour, I would see her disappear into distant corners or into the tree line. I think she was fae. 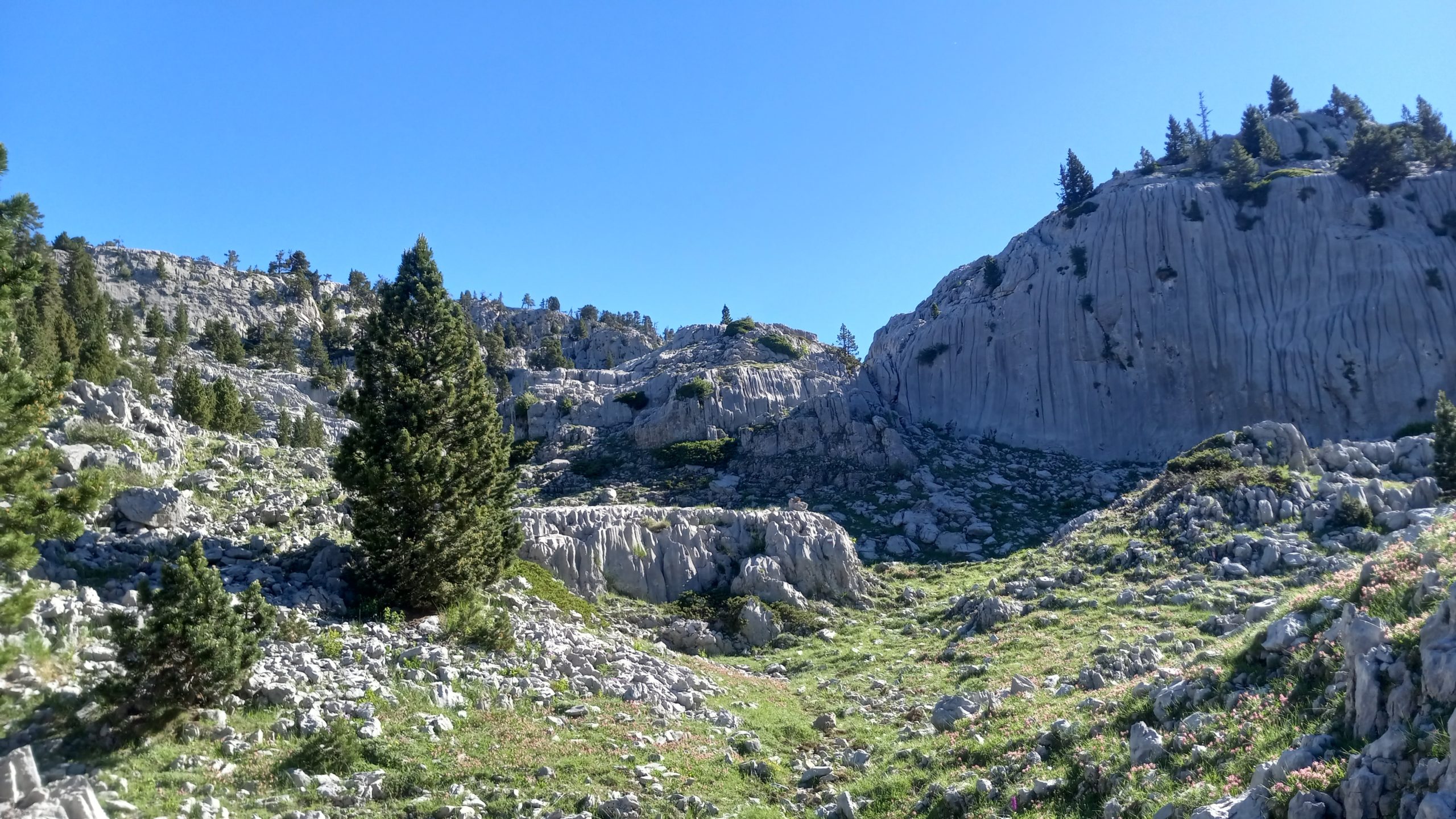 The trail culminated in what the guide described as a “limestone maze”. It was reminiscent of the high mountains of Colorado, the Wind River Range and the High Sierra, but unlike any of them. 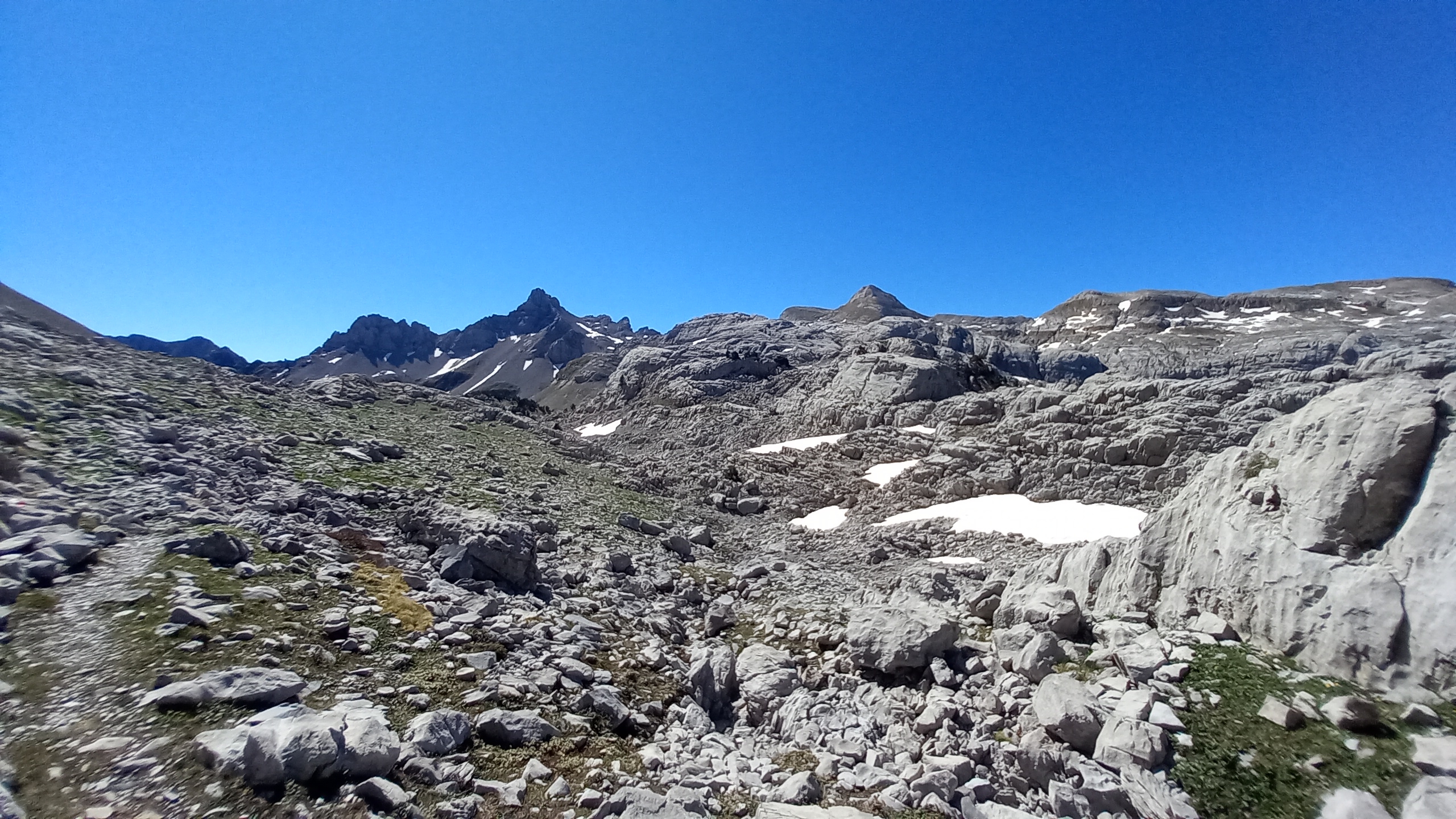 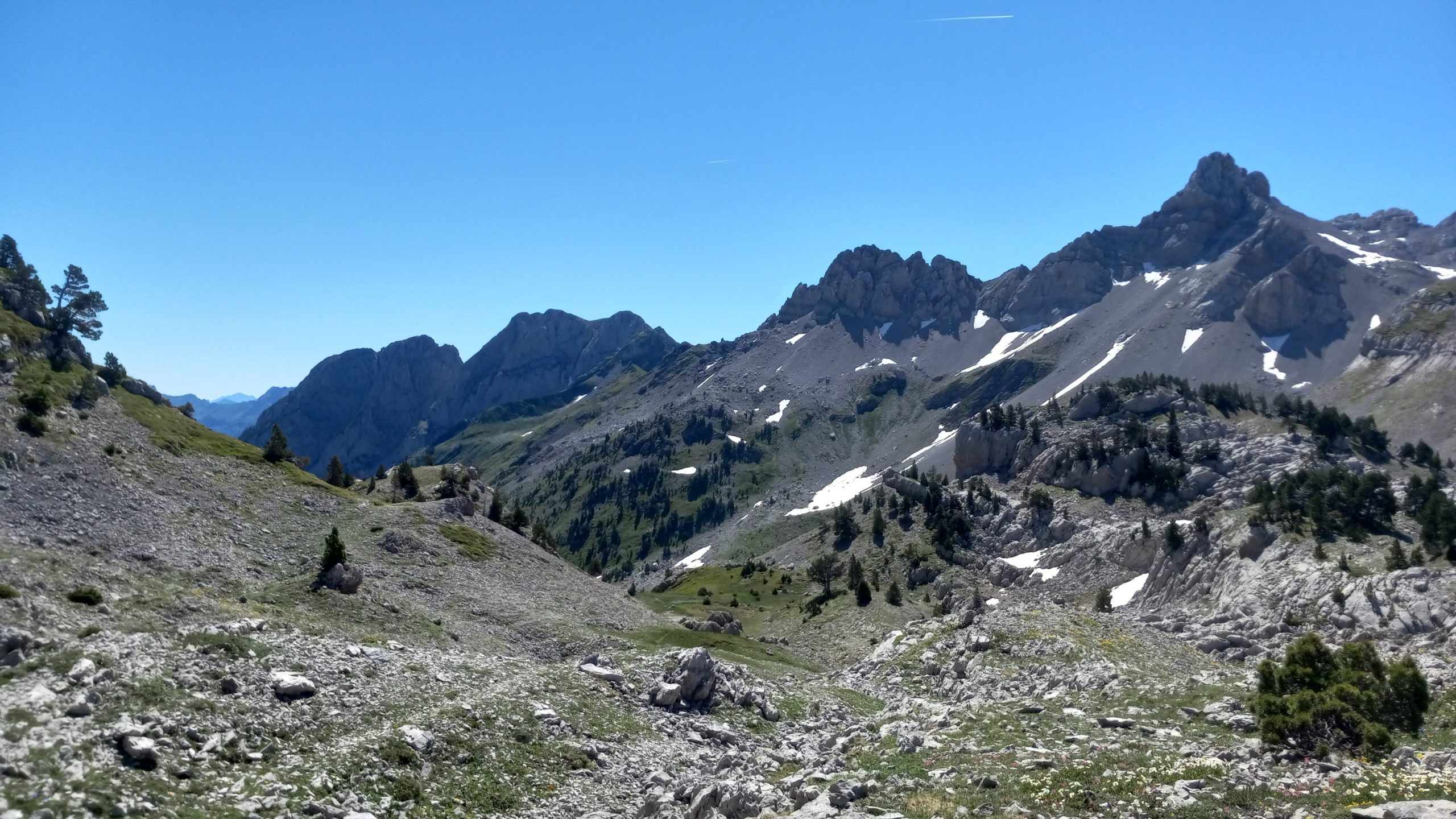 After bouncing through boulder-filled valleys, paying particular attention to the red and white stripes that mark the safe path, the path overcame a snow-covered pass. It then descended to a gurgling mountain stream, La Source de Manitou, a perfect place for a lunch break and a short siesta. 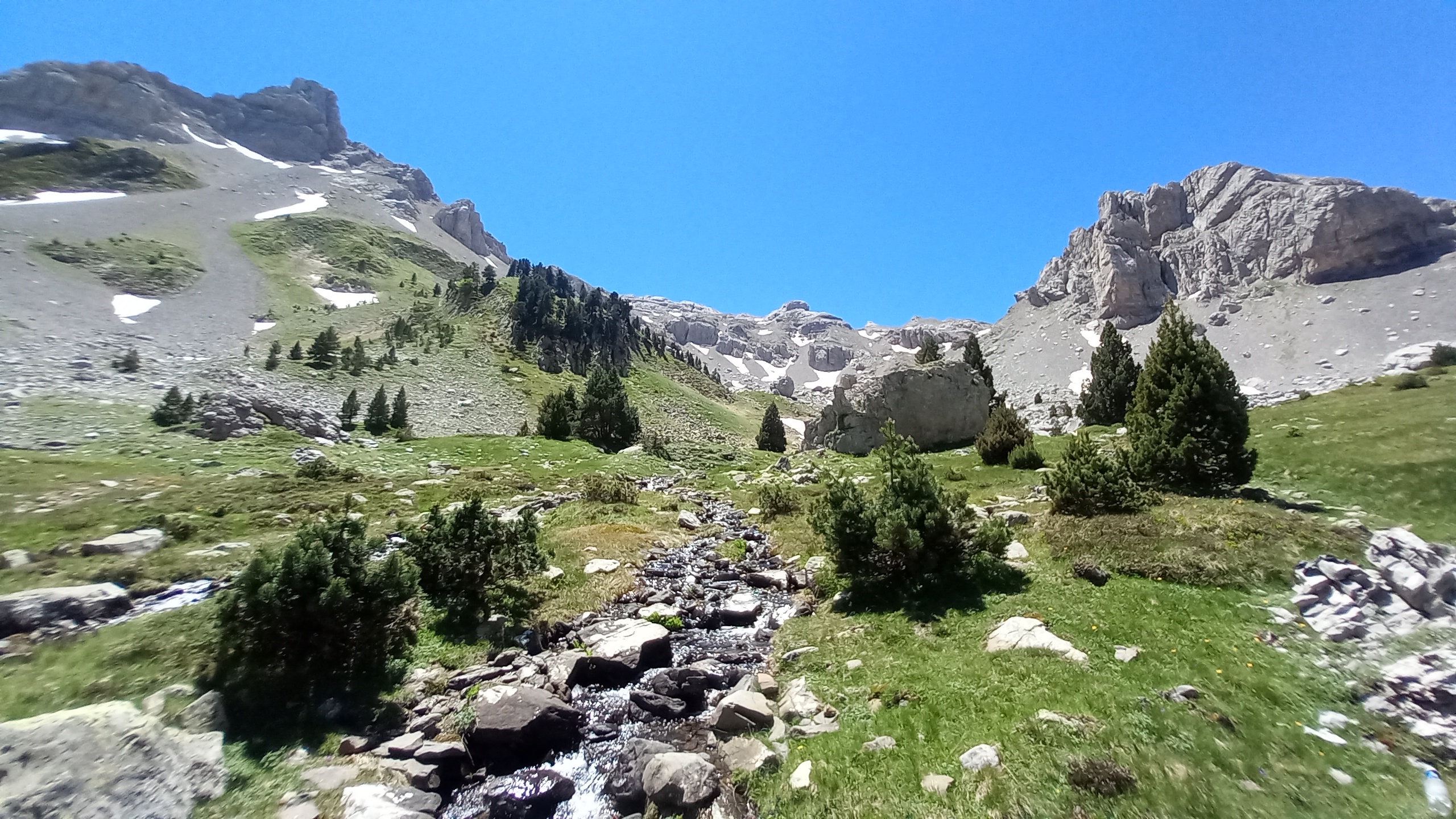 I expected Johan to catch me here, but after waiting a few hours with no sign of him, I decided to go down and meet him in town. The prospect of beer and ice cream, showers and laundry made me come.

The descent was long, nearly 4,000 feet in about 5 miles. After passing through shady forest and following switchbacks next to a hidden waterfall, the trail spat me out onto a plateau with a few campers and vanlifers below massive cliffs. 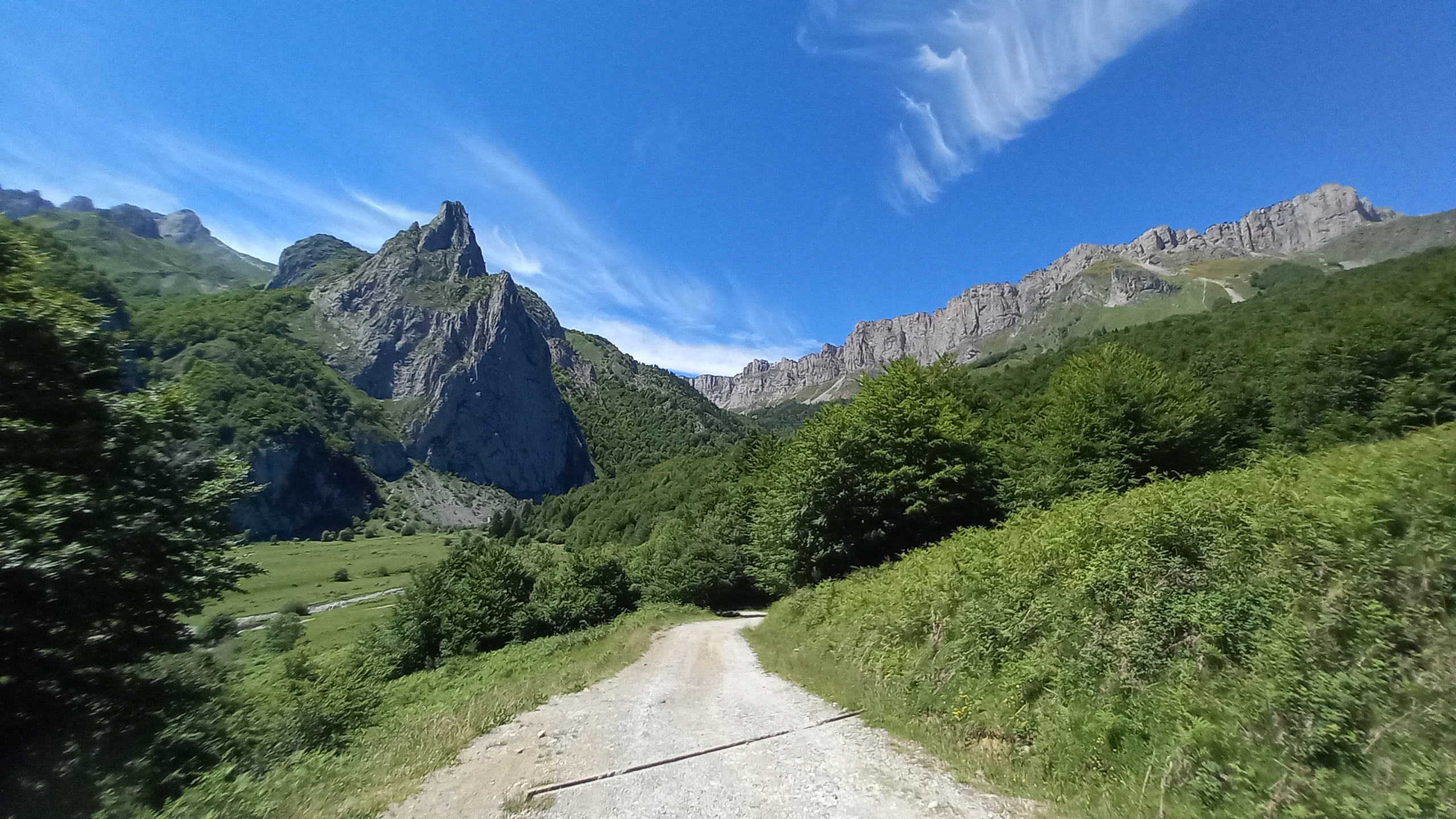 The last mile or two into Lescun followed a dirt road that turned into tar and dropped gently into the small medieval town at the east end of the valley. 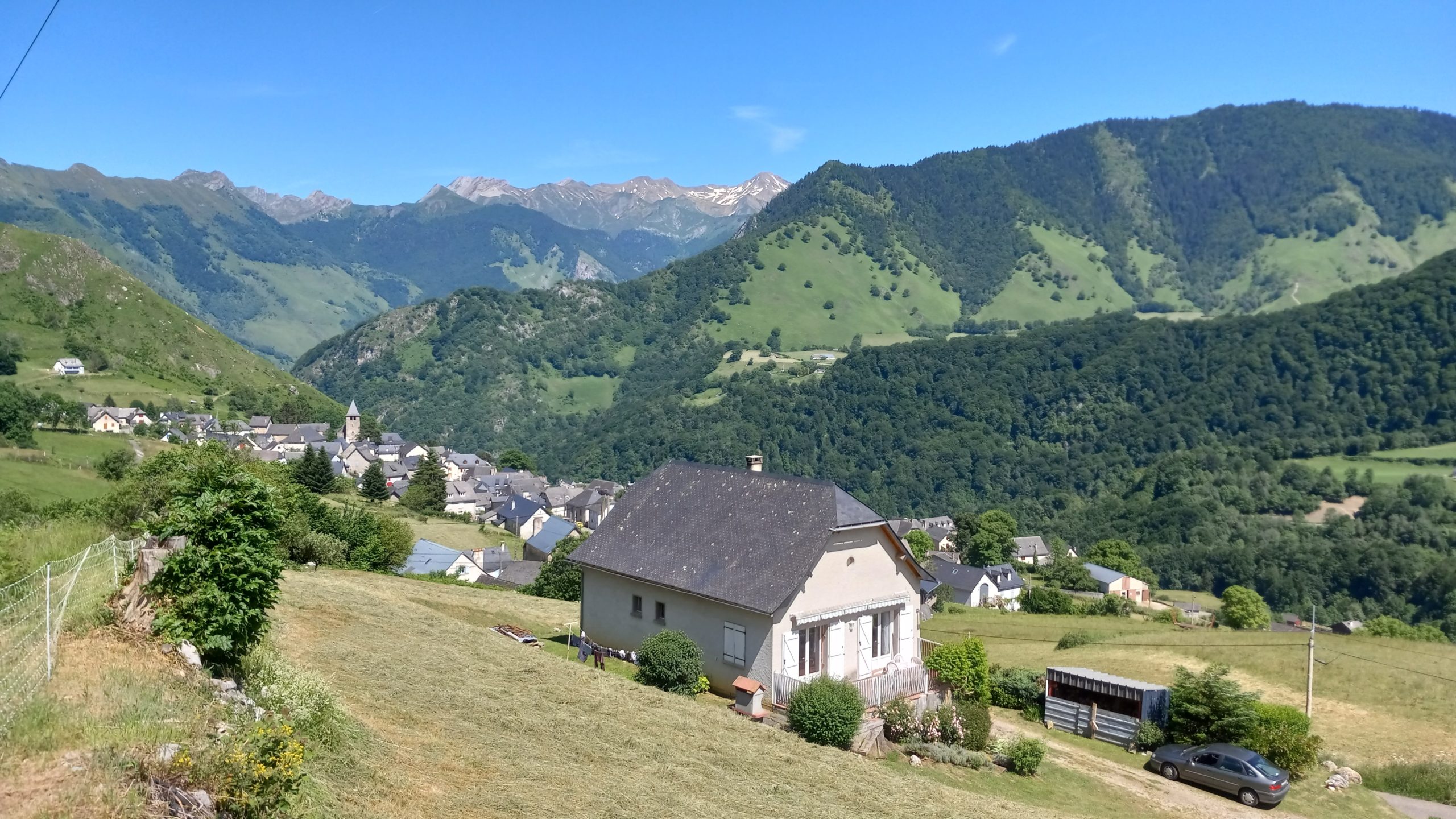 I got a bed in the gite downtown, set up this laundry and the first of two showers, and made arrangements for dinner and breakfast with the hotel on the other side of the road.

While waiting for dinner, I had a beer at the little shop in town and, while I was sipping some foam, Johan happened to walk in. He decided to stay at the campsite below the town. We had a beer and swapped stories from the day, then we said “see you tomorrow”.

I had dinner with a handful of GR10 hikers – a tomato and pepper salad, a tomato-based cereal and vegetable dish with Basque sausage, several cups of good red wine and a creme brulee for dessert. After getting drunk, I took a little walk around town and enjoyed the sunset. 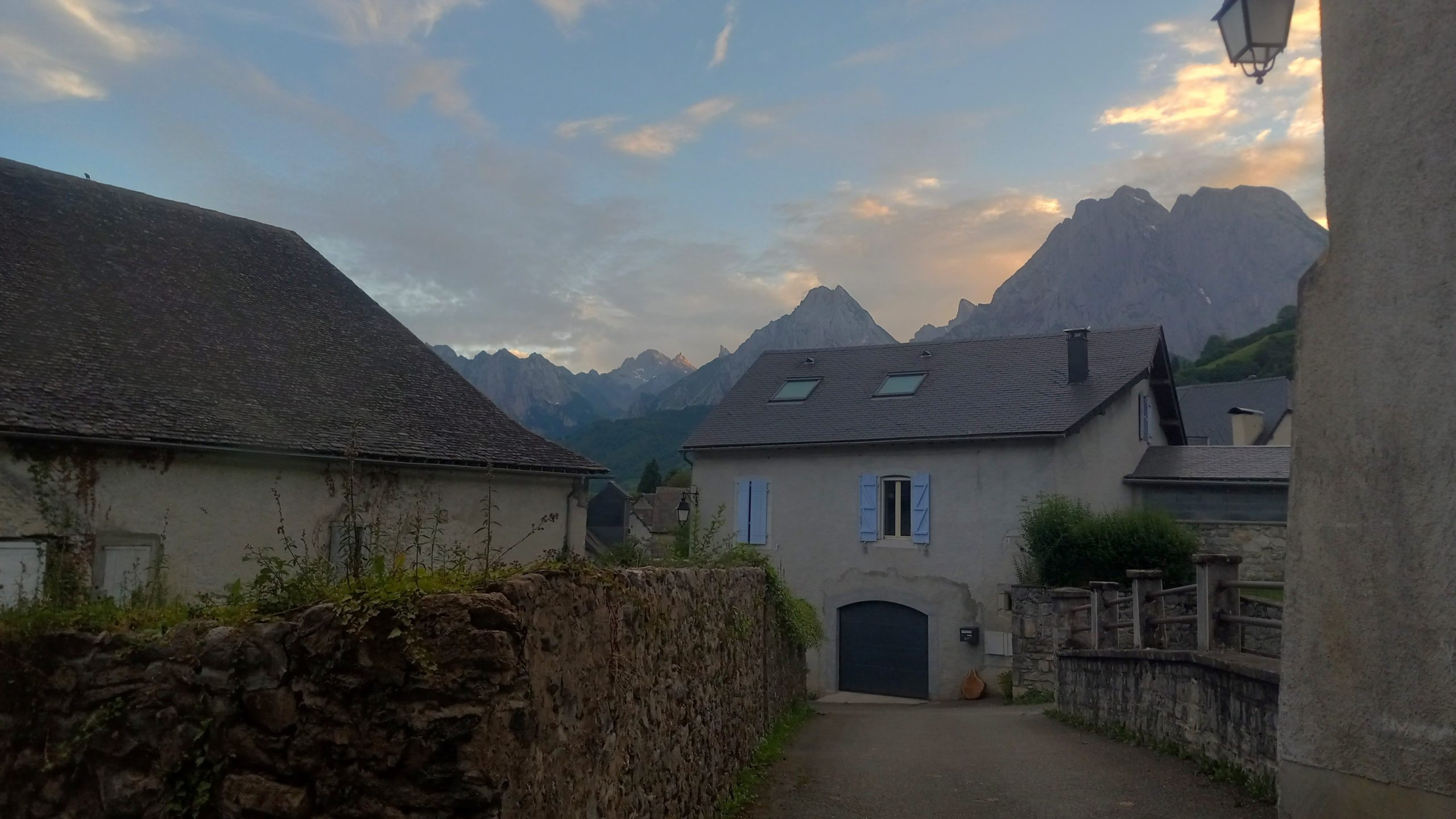 First zero of the hike. I took time for some sleep (but took a short walk to catch the first mountain light on the surrounding peaks) and another shower, then a leisurely breakfast. I bought my supplies for the next few days and some postcards. 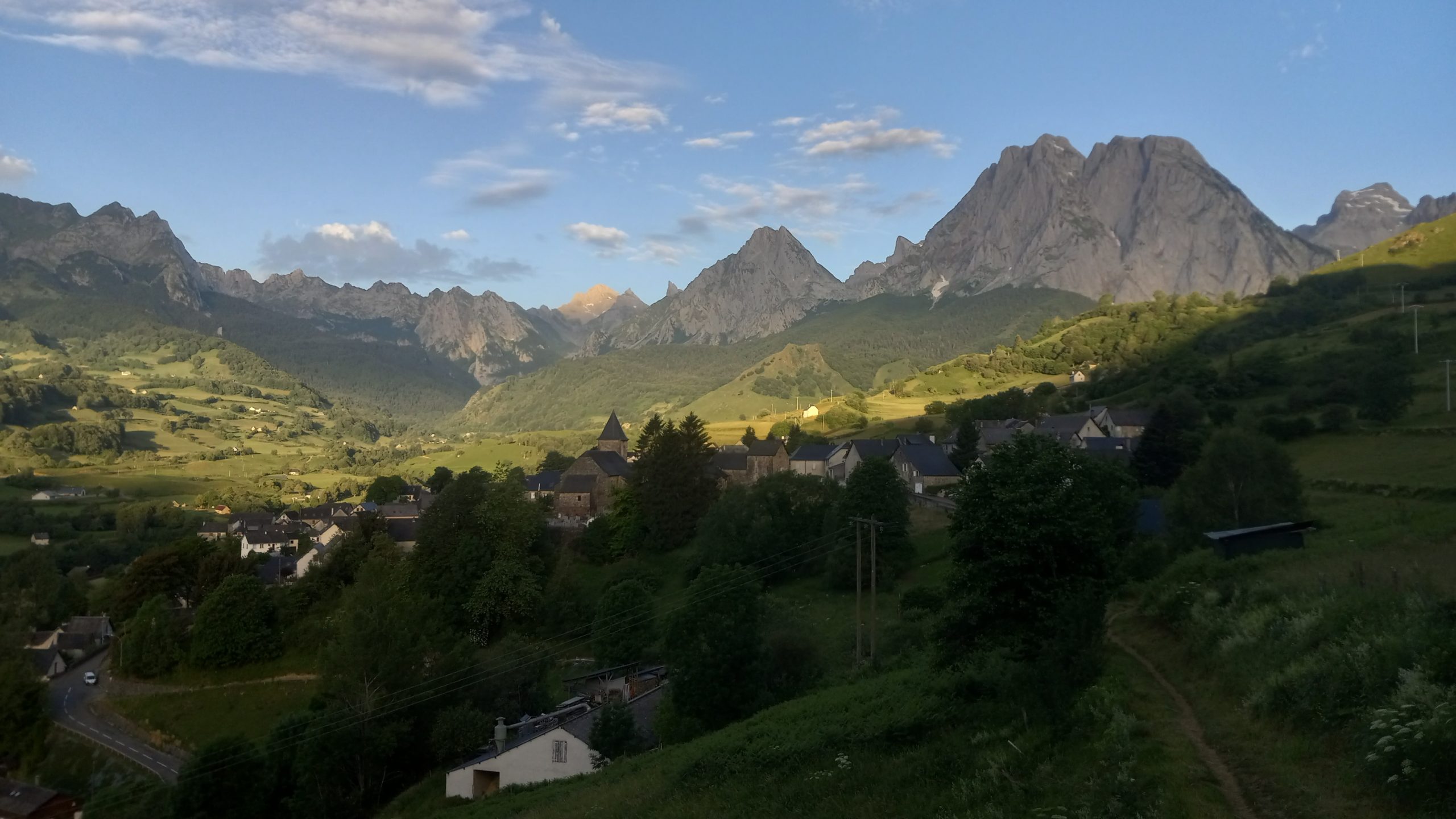 After lunch I went down to the campsite to wait for my buddy Rewind, we met on the Pacific Northwest Trail and he will join me for the rest of the HRP.

It was a super mild rather warm day to rest and relax before the next gnarly stretch in the true high mountain Pyrenees. I’m super happy with what’s to come!