MAlibu or Normandy? In the first, you turn around the corner on the Pacific Coast Highway; salt spurts from the ocean as the California sun welcomes you to a millionaire’s playground of artists, models and movie stars. Normandy? Not really. Yet it was in the northern countryside of our nearest neighbor that one of these same artists chose to hang his hat.

Already a regular in Paris, Notting Hill, Bridlington and, yes, Los Angeles, David Hockney moved to Normandy in 2019. Seduced by the light of the region, he started working at a phenomenal pace. “I think I have found a real paradise; this place is perfect for me right now,” he wrote, enthused to his friend art critic Martin Gayford.

“I’m on the edge of something; a different way of drawing is emerging. . . I couldn’t do it anywhere else; you must be somewhere like that. Praise indeed.

David Hockney in front of his painting A Year in Normandy

Covid couldn’t dull his enthusiasm; Quite the opposite, in fact. Free from distractions during lockdown, Hockney was inspired to create his greatest work. A Year in Normandy is the title of this epic tableau – a 90m panorama of the Normandy countryside, presented season by season in typically vibrant color.

If you want to see it, you have a pleasant dilemma. The painting is currently on display at Salts Mill in Saltaire, West Yorkshire (free; saltsmill.org.uk). But on September 22, it is transferred to Bayeux, where it will be exhibited until spring alongside the tapestry (£9; bayeuxmuseum.com). While the 11th century work portrays Anglo-Saxon power and politics, Hockney’s work is pure joy and freedom.

Last month, I took my family to visit the paint raw material. The heat wave had helped bring Hockney’s frieze to life, even though the grass was more yellow than usual, according to residents of his adopted home in Beuvron-en-Auge. But hawthorn, blackthorn, mature oaks and summer flowers provided a kaleidoscope of colors. These half-timbered houses that surrounded us even evoked a framework. 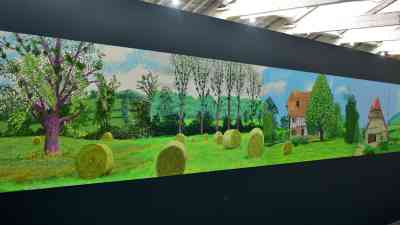 A Year in Normandy is 90m

Faced with fierce competition, Beuvron-en-Auge is regularly presented as one of the most beautiful villages in France. If my family was concerned that there wasn’t much to do, it was quickly confirmed on arrival. Gloriously so. With a bar at one end, a picnic area at the other, and a few restaurants in between, it’s the perfect place to do little.

There’s a workshop and gallery space, and what was once a covered market now houses an antiques arcade and a Michelin-starred restaurant, Le Pavé d’Auge. We eschewed haute cuisine in favor of much simpler dishes at Antoine et Lucil, where Antoine’s interior design complements Lucil’s healthy salads and vegetarian dishes (mains from £6; antoineetlucil.com). 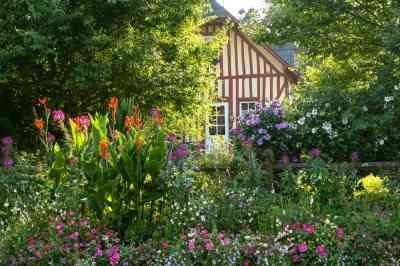 Pretty as a picture: Beuvron-en-Auge

Hockney speaks fondly of the village in Spring Cannot Be Cancelled, the book recording his Norman conquest, written with Gayford. He mentions having dined almost every night in 2019 at L’Orée du Village, describing it as a “worker’s café”. It’s a bit more than that. The only workers we saw were the servers. I asked if anyone had met the tall man, receiving only a shy smile and a fellow “no” in response. Discretion, no doubt, or perhaps the result of my poor French (mains from £6.50; no website).

A casual panorama of the village is also reproduced in the book alongside other works and conversations with the artist. A joy to read, it portrays Hockney as one would expect: a cozy riptide; a bohemian fond of creature comforts.

But what do the locals think of their famous neighbor and his effervescent gaze on their bucolic setting?

“I think it’s . . . strange but nice,” said Alain Cantel, the owner of the nearby Château des Riffets, which is one of several stately homes in the area converted into bed and breakfasts – many of which are as enchanting as the landscape.

We spent two nights at the Manoir de Sens, just outside Beuvron. Originally another castle, it was later rebuilt in the style of an English country house after a fire damaged the building. 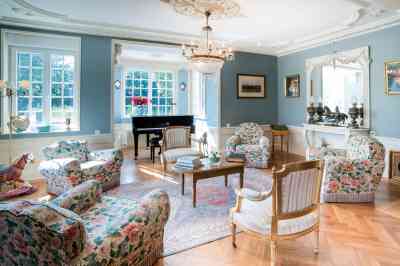 Owner Philippe David gave us a thorough grounding in local history. Swallows fluttered between the rafters of the Manor where, he said, a British airman had hidden for two weeks in 1940 before being whisked away to Caen. He also pointed to the eccentric finials protruding from the skylights in the roof: a rooster, a heron, a squirrel and a man astride a barrel of calvados.

Apples are a mainstay of the Normandy economy and besides the Hockney connection, I was enticed by the possibility of tastings at boutique producers – of apple juice, cider and cider vinegar – but mainly Calvados. Let’s say it’s a good thing that I arrived with plenty of space in my trunk.

Our week ended at Gîte Le Pontallery about 30 minutes from Beuvron. Vast grounds were dotted with apple trees and a pond. But now the children were tired of their parents insisting on one more visit to an antique shop or a distillery, so it was just as well that the coast was nearby. 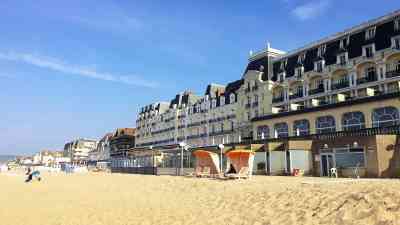 The Grand Hotel and Cabourg beach

Deauville, with its imposing seaside mansions and grand hotel-casino, could easily be renamed Bourgeois-en-Mer, but the vast expanse of sand offers acres of space for everyone. Down-to-earth Cabourg is how Eastbourne might have felt if the Normans had stayed a few centuries earlier.

I could have happily spent another week sunbathing while pretending to go on a serious art tour. But the temptation to come back to see A Year in Normandy in Bayeux is just as strong.

Matt Hampton was a guest of Atout France (en.normandie-tourisme.fr) and Eurotunnel, which offers Folkestone-Calais returns from £174 (eurotunnel.com). Double bed and breakfast at Le Manoir de Sens from £75 (manoirdesens.com). Seven nights in a gite for seven people at Gîte Le Pontallery from £430 (gites-de-france-calvados.com) 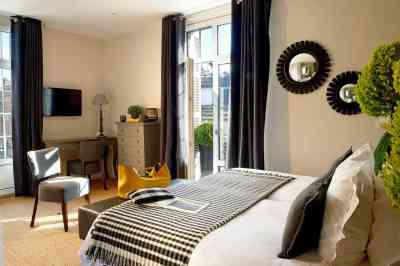 Three other accommodations in Normandy

1. The Horseshoe, Trouville-sur-Mer
Connected to Deauville by the Pont des Belges on the other side of the Touques, Trouville is the oldest of the two seaside resorts, even if the two towns have long been treated as honorary arrondissements in the west of Paris. The three-star Fer à Cheval, three streets back from the wide beaches of Trouville, offers 52 rooms in soothing colors. Most are in a classically elegant townhouse, with some in a 19th-century annex around a garden courtyard. Come outside of peak season and it’s very reasonably priced.
Details Double room from £65 (hotel-trouville.com). Ferry to Le Havre or Caen, or Eurotunnel to Calais 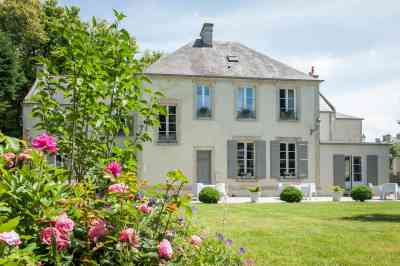 2. Le Petit Matin, Bayeux
A ten-minute walk from the cathedral and the Bayeux tapestry, the 17th and 18th century Petit Matin, top right, could almost be a country guest room, with its gray shutters opening onto a large garden or on the lime trees and lawns of Place Charles de Gaulle. The five bedrooms are discreetly eclectic in style, with a mix of antique and contemporary furniture, frills and sobriety.
Details Double bed and breakfast from £70 (lepetitmatin.fr) 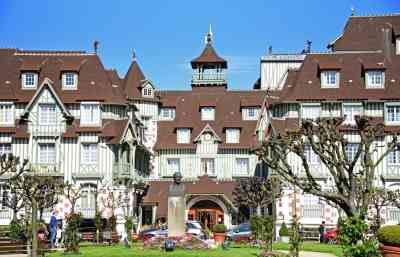 3. Hotel Barriere Le Normandy, Deauville
The Normandy Hotel opened in 1912 to capitalize on Deauville’s fashion boom – its pistachio-green half-timbering inspired by the architecture of Anglo-Norman cottages – but grew to become a sprawling resort where Coco Chanel had his first shop. With a casino to one side and the beach to the front, beyond the tennis courts, it’s an impressive place, even with the weight of a century of expectation. Toile de Jouy rooms and a glass-roofed pool keep the opulence score high
Details B&B doubles from £250 (hotelsbarriere.com)
Rory Goulding