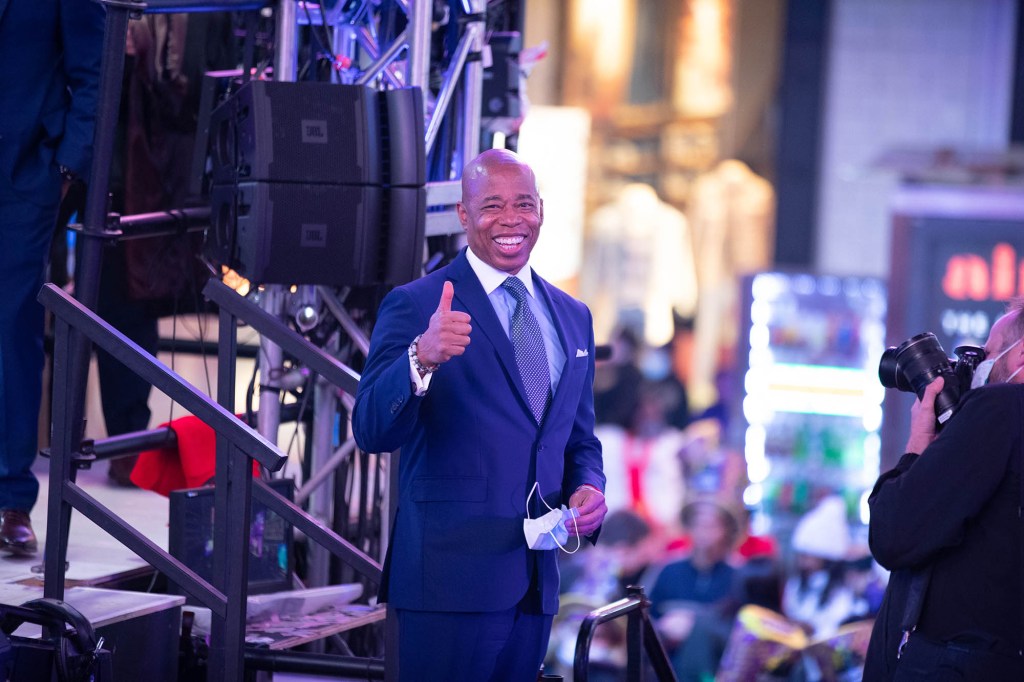 It’s the dawn of a new chapter for New York

Good news, New York: the new year has finally arrived – and with it, thankfully, a brand new day for the city and state.

Think about it: Mayor Bill de Blasio’s reign of error is finally coming to an end. Arrogant and dictatorial Governor Andrew Cuomo is gone, hopefully forever.

New Mayor Eric Adams, who takes office on Saturday, offered encouraging signs of how he will turn things around and restore the city. Even better: over 90% of adults in the city have been vaxxed, and even more are naturally immune after being exposed to the virus.

Finally, there are reasons for hope for New York – but also for concern.

Let’s face it: Gotham shrunk significantly during the de Blasio-Cuomo years and not, as de Blasio claims, just because of COVID. Violent crime spirals out of control. The homeless, the mentally ill and drug addicts took to the streets.

Failing public schools languished for years under de Blasio, even as he wasted millions on consultants and focused on bogus “racial” issues, and Albany capped the number of successful public charter schools to please. to teachers’ unions. When COVID hit, schools went from ugly to nearly useless, as children had to learn via computer screens.

Even the city budget is in a worrying state: De Blasio has inflated municipal staffing and increased spending to three times inflation — before COVID has struck. Uncle Sam has sent billions to the city in pandemic relief, boosting spending to $103 billion this year. But this type of spending is not sustainable, especially if post-pandemic income is slow to return.

Adams seems to be aware of these issues. He put crime at the top of his agenda, and you can see why: shootings in 2021 exceeded those in 2020, which was double the previous year’s number. Murders also topped 2020, which was up 44% from 2019.

Adams, an ex-cop, actually supports police and knows what needs to be done: He has championed the ‘smart’ use of stopping, questioning and frisking suspects and plans to reinstate undercover officers who have focused on removing illegal weapons. He opposes defunding cops and parts of the state’s no-bail rules that prevent judges “from exercising the discretion necessary to keep violent individuals in jail.” He criticized the judges for being overly lenient. And as for the homeless and the mentally ill, Adams is committed to providing them with the services they need.

All of this is extremely encouraging. Still, changing Blue York’s status quo is a monumental lift: Adams, for example, will have to persuade Albany lawmakers, which now include many anti-police radicals, to fix bail reform laws.

A lawsuit and federal comptroller limit the city’s use of stop and frisk. By decriminalizing low-level crime, the city council essentially banned broken window policing, which proved essential in reducing the city’s crime rate.

Additionally, some city prosecutors, such as new Manhattan District Attorney Alvin Bragg, act more like defense attorneys, protecting the guilty rather than enforcing the law. If Bragg or another DA refuses to help stop the chaos, the new mayor can push the governor to impeach him and/or use his bully pulpit to force change.

To fix the schools, Adams has brought in a hugely promising chancellor, David Banks, who isn’t afraid to admit the catastrophic failure of the system.

“Any agency that has an annual budget of $38 billion” but leaves 65% of minority children without academic skills is “outrageous,” he says. “It’s a betrayal.” Banks and Adams hold educators to account. They also want to expand Gifted & Talented programs, so children of all races and backgrounds have a chance to benefit.

The new mayor also seems open to creating at least a few more charter schools in the city, an absolute must if students are to be given a chance to escape failing schools. Yet again, it’s up to Albany to lift the cap on municipal charters, and the teachers’ union is dedicated to fighting accountability for its members.

More: Adams showed common sense by reaching out to the business community and signaling an end to the progressive view that corporations are there to be squeezed for taxpayers’ money and otherwise looked down upon, used as scapegoats and regulated.

“It will be a place where we welcome businesses,” promises Adams. “The government must do its job to create an environment conducive to growth.”

If he can help businesses recover from the pandemic and shutdowns and perhaps even grow, it would not only help the economy and bring the city’s unemployment rate (9%) closer to that of the country ( 4.2%); it would also bring in more tax revenue to support the budget.

Yet de Blasio’s spending plan leaves billions in gaps for years to come, and any increase in COVID restrictions will only hurt businesses further. Adams will therefore have to put his new anti-waste office to good use in order to eliminate fat.

Governor Kathy Hochul may also prove problematic, trying to appease far-left progressives as she runs for governor. And progressives, unions and other special interests will push their own agendas.

All of these challenges would be daunting for any new mayor. Still, Adams represents the best prospect the city has seen in years. And even Hochul can still prove a force for good. As the sun rises on a bright new chapter for Gotham, New Yorkers should support them both.