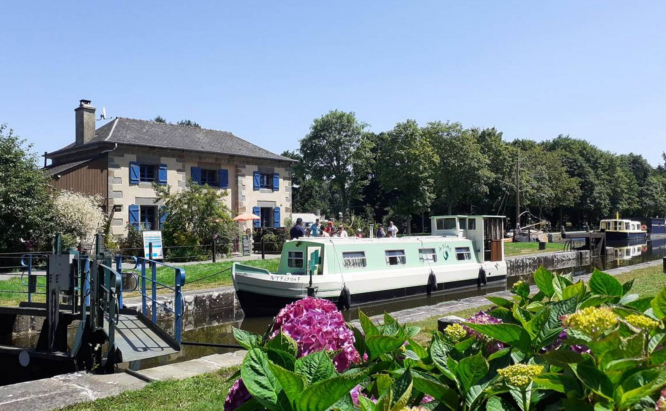 Entrepreneurs are taking over lock houses and stretches of riverbank for low rents as part of a project to boost the tourism potential of Brittany’s ancient waterways.

The program began in 2013. Changes in local government meant that the Brittany Regional Council became responsible for the area’s canals, many of which have not been in commercial use for many years but still have water systems. locks in working order.

In the past, each lock had its own lock keeper, responsible for helping boats navigate and maintaining the lock infrastructure.

Now, it is no longer necessary to have a lock keeper at each house: pleasure boats operate the locks themselves or rely on the services of mobile lock keeper who travel between sites in cars and vans.

In total, there are 156 lock houses on the 440km of canals in Brittany.

Véronique Gonzalez, head of tourist services at Redon Agglomeration which manages the scheme, said: “People like to be at the water’s edge, so keeping the paths open and developing tourism makes a lot of sense.

“It’s a way of using the heritage we have, while giving people the opportunity to have businesses they might not otherwise have.”

The region remains the legal owner of the lock houses and the canal and its banks, and is responsible for basic maintenance, including walls, roofs and sewage systems.

Everything else must be paid by the successful bidder, who benefits from low rents and guaranteed occupancy rights for 10 years.

Brilliant example between Rennes and Saint-Malo

One of the stars of the first round of the project is the Ille Flottante venture of sleeping on a boat, developed by Catherine Saint-James and her musician husband Guillaume.

It is on the Ille-et-Rance canal, on the outskirts of the village of Hédé-Bazouges, between Rennes and Saint-Malo.

The couple took over a lock house and moorings with the idea of ​​living in the house themselves and having people stay on boats on the canal.

They originally used wooden boats specially built for the Loire, but these were sold after a few years due to the maintenance required.

They have been replaced by “themed” craft, including a cabin cruiser, houseboat, converted houseboat, “yellow submarine” houseboat, and sailboat.

The couple also runs a bar and a café, organizes jazz concerts and rents out bicycles and small motorboats.

More recently, they converted the stables, originally used by the canal horses to pull boats, into accommodation, and last year took over a second nearby lock house to expand the business.

Arrangement not without problems

“We lived in the village and realized the potential of the site,” Ms Saint-James said.

“When the region decided to use the lock houses, we knew it was something we could do and we are proud to have used them.”

The couple pay €3,000 a year in rent for the whole business and the house, and have been given guarantees that the 10-year contract will be renewed in 2023 before work begins on the second house.

“The low rent allowed us to spend on the business, but the arrangement has its problems,” Ms Saint-James said.

“We can’t sell the business when we leave and get no return on the rising property value as we transform it from a sad, empty house into a thriving tourist and social hub.”

The extreme seasonality of a canal-based tourism business can also be difficult to manage.

“We work very hard from April to October, with four full-time employees in the company, but for at least five months there is no work, which is a difficult way of life.

“I plan to look for a salaried job in four or five years to have more financial security, and I hope to find someone to take over the day-to-day management.

“But we went in with our eyes open, the project has benefited the region, and I would recommend a similar arrangement for people who think they would like to start a tourism business on the canal.”

The last call for projects is closed, but there could be others in the years to come.