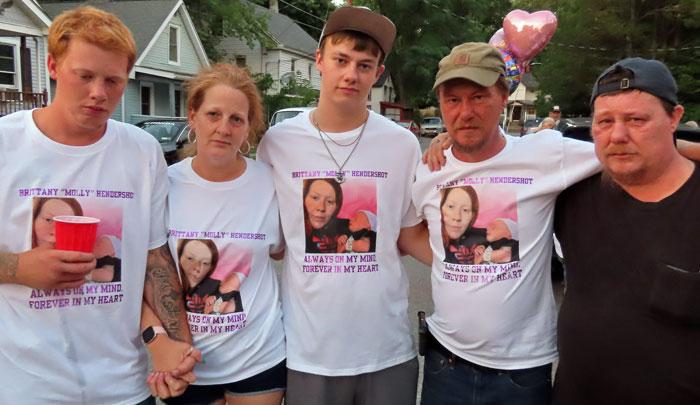 PORT JERVIS — Brittany Amber Hendershot would have turned 22 last week, but never got the chance to celebrate the birthday in her typical, fun way, with family and friends. Instead, a wake is being held today, August 23, and a funeral and burial tomorrow.

“I can just say to all parents, if you feel like the person your child is with is using drugs or controlling your child, call them. Go with your gut,” her father, Lee Hendershot, told Mid-Hudson News. “I called him on it. He lied. I had a bad feeling, but I couldn’t save my daughter.

Missing for nearly two months, Brittany’s remains were recovered from a wooded area in the town of Wallkill last week, Monday August 15. Her grieving parents, Lee and Crystal Hendershot, and other relatives say they remained hopeful until after this intense search results would yield a different outcome for her daughter. Instead, Brittany’s identity was positively confirmed by an autopsy performed last week by the Orange County Medical Examiner’s Office.

A cause of death and other test results remain pending as all information is analyzed and reviewed.

“We’re trying to hold on for Brittany’s child, but justice must be served. There’s no way my daughter lived in these woods by choice,” Lee said at the memorial gathering. “She had a house and she had a baby. He (her boyfriend) was controlling. She did everything he wanted her to do. It just wasn’t Brittany.

On what would have been Brittany’s 22n/a birthday, August 19, the Hendershots spent the day planning a funeral and the evening attending a candlelit memorial service held for their daughter.

Brittany loved music and dancing, and the two were included — with many tears — at the memorial attended by dozens of people. Those who knew Brittany confirmed her parents’ feeling that she would never have chosen to give up her baby.

As she prepared for Tuesday’s wake, Crystal Hendershot said her daughter was misled by what she felt was love.

“She thought she was in love. She and the baby were welcome to live here, but we didn’t want her boyfriend here. He was controlling and wasn’t good for Brittany or the baby,” Crystal said.

Once before, Brittany, her boyfriend and their baby were located by a Port Jervis police officer in a wooded area of ​​Wallkill. He brought the baby and Brittany back to her parents’ home on June 12. Brittany told them her boyfriend had fled the scene.

“Brittany helped the police find her boyfriend at that time. She hadn’t run, but he had. Brittany told us he was on heroin and jumped in the river and ran – or something. He was found and arrested, but was released immediately. On prison reform,” Crystal said.

Once her boyfriend was released from prison, Brittany moved on, leaving her baby with her parents. She told her parents she would be back in half an hour, then followed up with a text that she was on her way home.

“She never came home again. Port Jervis Police came to our house last week with a priest to tell us she had been found,” Crystal said. “The police kept us informed and did their best to find her. We always held out hope that she would be found. But not this way.

Reached the morning of Brittany’s wake, Port Jervis Police Chief William Worden said police and others, including the general public, searched diligently to find Brittany. This was PJFD Chaplain Tom Zahradnik, Sgt. Chris Sargente and Officer Osowick who broke the tragic news to Brittany’s parents when she was finally found.

“Much of what we do isn’t visible to the public, but we’ve searched diligently for weeks and followed many tips and leads,” Worden said. “Unfortunately, this has brought some closure to Brittany’s family, but not the closure we had hoped for. The autopsy results will continue to be reviewed and all results will be analyzed for several weeks. This remains an active case with New York State Police,” Worden said. “We greatly appreciate the strong partnership we have with the public and other police departments, and appreciate all of the assistance we receive.

A wake will be held on Tuesday, August 23 from 2 to 4 and 7 to 9 p.m. at Gray Parker Funeral Home. Interment will be in Hillside Cemetery following a funeral service to be held at 10 a.m. on August 24 at the funeral home.