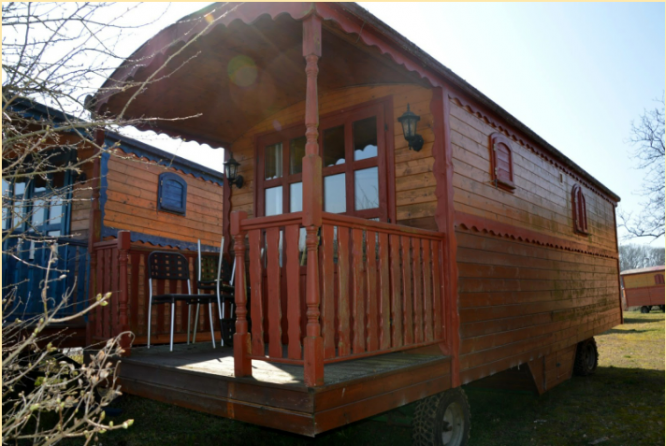 What would you do with a traditional style wooden caravan? An auction to sell 12 such trailers starts today in France with prices starting at €4,000 depending on the state of repair of the item.

The traditional caravans, known as ‘trailers‘ in French, are auctioned for the first time by the communes of Haute Comté, in Haute-Saône.

The event is organized in collaboration with the online public auction house Agorastore, which helped the Cher department organize an auction of 45 similar caravans in 2021, for a total of €721,000. The objective is to provide the auction with “national visibility” to increase the chances of good sales.

Philippe Du Pasquier, Agorastore’s business developer in charge of the auction, said the lots were rare and were “not the kind of thing communities usually have”.

The auction will run for three weeks from today (May 3) until May 25.

The trailers were originally used as tourist accommodation in the Vergers de Fontenois.

The lots consist of 12 traditional style wooden caravans, designed to accommodate 4 people and equipped with a mini-kitchen and bathroom, as well as a television and other modern conveniences depending on the model.

Prices range from €4,015 to €9,146 depending on the condition of the caravan, and each is sold individually.

Interested parties are expected to be tourism professionals, campsite managers or people who own lodges or bed and breakfasts and wish to offer an additional service.

There is also a growing trend among people who want to install a caravan at the bottom of their garden to make it an unusual guest room, but also people who want to develop a more unusual outdoor project, such as the inhabitants of these full-time caravans and operating a permaculture site, for example.

Caravans are not legally approved for use on the road, so buyers will need to arrange additional transport – such as a trailer or larger van – to bring them home once the purchase is accepted.

Proceeds from the auction will be reinvested in the tourist site.

Ms. Jeannin explains: “The objective is to bring this tourist site back to life by developing yurts there. Three caravans have been renovated and kept on site. We want to relaunch the dynamic around eco-responsible tourism.

The municipality is also looking for a new buyer for the tourist site. Ms. Jeannin said: “Visitors fell in love with the site. The auction allowed us to put the site in the spotlight and launch a call for projects to also find a buyer.

Note however that keeping a caravan in your garden with the intention of using it as part of your accommodation, or in any case if it stays there for more than three months, is subject to planning rules.

You will need to do a prior declaration of work (prior declaration) to the town hall if the surface is less than 20 square meters (the tacit agreement is obtained after one month without opposition, or even two in certain protected areas), or request a building permit (planning permit) if it is larger than that. If you are considering buying one, it may be advisable to speak to the town hall first, to check in advance if there are likely to be any issues in terms of local planning regulations.

Are we allowed to leave our caravan parked on our land in France?

Making sense of… Towing a caravan legally in France