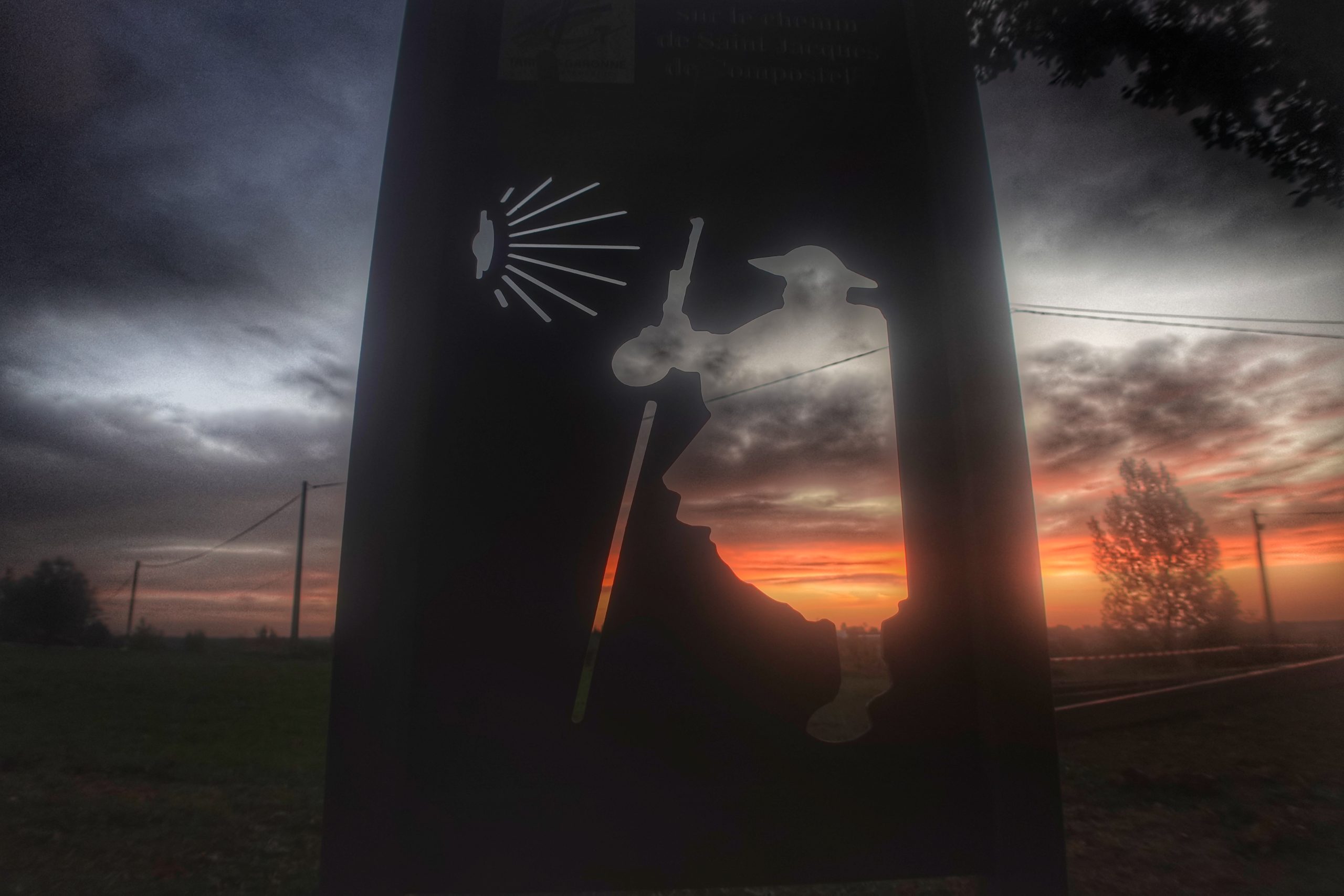 Week 3 on the Camino

Another day spent mostly in a beautiful forest.
It’s flat and easy, the sun is shining, it’s one of those cruise control days.
What I appreciate.
I have to say though that it’s October 16th and it’s really weird how hot it is.

No nice villages today but I pass by Labastide-Murat at lunchtime and hope to get my hands on some famous Rocamadour goat cheese.
I find some, but there is no more bread.
This is exactly what happened yesterday when I was in Rocamadour.
Well, hopefully tomorrow, when I get back to Cahors, I should be able to find both.

In the evening I reconnect with a section that I had already covered at the start of the alternative Célé five days ago.
But after about 5 km I will do an alternative within the alternative, so I won’t do too many kilometers.

It’s a very nice walk along the Lot before returning to Cahors.
Finally, here I am back on the track and on the GR 65, after having covered the section between Figeac and Cahors three times!

Leaving Cahors, I spot a very familiar sticker on a post.

It is the one used as a landmark during the Shikoku 88 temple pilgrimage in Japan.
Not sure how this sticker ended up here, but it certainly brings back memories of hiking this trail in 2015.

There are some pretty dark clouds and of course it starts to rain when I stop for lunch. And stop when I’m done.
It clears up and gets really hot.
Which, again, is crazy on October 17th.

I realize that yesterday was my first day without seeing a single pilgrim and I haven’t seen any today either.
Until I saw one in the afternoon walking into a grocery store with the biggest backpack I had ever seen.
Without judging, we’ve all been there.
But man, it’s big.

While I’m looking for places to host the data for the hiking app I’m working on, a lady asks me if I’m lost.
I tell her what I’m doing and right away she says aggressively that people shouldn’t be spending so much time on their phone talking to each other.
I tell him that while that’s a valid point, I don’t know how it’s relevant to a navigation app and what I’m currently doing.
She keeps bitching, so I wish her a good day, put my headphones on, and keep walking.
Life is too short to talk with aggressive idiots.

As I prepare to leave Lascabane, I see that a gîte is open and ask if there is a bed left. They do.
There are only four pilgrims in the lodge.
And out of four, two are Swiss.
The Swiss love to hike.
I remember how amazed I was on the PCT to meet way more hikers from Switzerland than from any other country (apart from the US of course)
It’s nice to have company for the evening.

What a day.
It looks like a real summer day.
I think it’s getting hotter every day, it’s so weird…

I arrive in a city famous in France… for its name.
It’s called Montcuq, which translates to Myass.
Every possible joke has been made about this place and it is indeed difficult to have a sentence that does not sound weird if it contains the name of the city.

Montcuq is actually really nice. You could say that Myass is definitely not a shithole.
Sorry about that… I had to make one.
But it’s actually a nice place.

The lady at the tourist office is super talkative and I stay there for quite a while.
I try to go to a tourist office a day to get my pilgrim passport stamped.

Then, I meet a lot of pilgrims.
I finally leave town planning to go to lunch at the next one, Lauzerte.

Along the way, a nice farmer gives me small peppers, perfect for my sandwich.
Then I meet a Kiwi pilgrim whom I take for an Aussie because of the accent.
That’s a big no-no and I should know better as I lived in both countries.
We talk about trails in New Zealand and Australia, and soon realize that we live in the same place in Australia.
And of all places, Katerine is a random little town in the middle of nowhere.
We are so amazed at this coincidence that we miss a marker and walk a good 20 minutes in the wrong direction.

I finally arrive in Lauzerte, which is another beautiful village, for a late lunch.
In town I meet more pilgrims and talkers.
Everyone seems to be lovely and in a really chatty mood today, maybe it’s the sun.
It’s awesome and definitely the most social day I’ve had since the start.

I see more pilgrims afterwards, including one who goes to Santiago by bike.
After not seeing a single pilgrim two days ago, today is the day I saw the most, which is surprising as I thought a lot of people stopped in Conques.

As I walk on the side of a small road in a forest, I see someone walking his dog, coming in my direction.
I can see something is wrong, but I can’t put my finger on it from afar.
As we get closer, I see he has his hoodie on and is wearing some sort of paper plate as a mask.
He acts a little weird too.
I have my hiking poles ready to punch him in the face if need be, but he keeps walking, making weird body gestures.
I am now 50 yards from him and I hear the weirdest laughter possible.
Imagine the worst actor in a Z movie trying to laugh like a psychopath.
That’s it.
There’s no point in speculating who this guy is and what he’s up to, but after about an hour I regretted not reporting him to the police.
I can’t even imagine what a 12 year old would think upon meeting this guy in the woods.
And just to be clear, it definitely wasn’t a Halloween costume.
Anyway, it was different…

The rest of the day it’s just me trying to get over this weirdo.
Oh and the cathedral in Moissac is stunning.
And the track became calmer again.
Only saw one lost pilgrim from Quebec today.

The rest of the day is spent through plowed fields, which may seem like the worst scenery to drive through.
But somehow, with the beautiful autumn light, there is a kind of beauty.
I guess I’m easily satisfied on trail.
As long as I don’t come across a boogeyman from a John Carpenter movie, I’m happy.

I decide to stay in a gite in Lectoure.
I join Louis, another pilgrim for dinner in town.
Some restaurants have a cheap, filling pilgrim menu, which I haven’t tried yet.
It is indeed a very good deal.
Louis started the Camino on day 1 of his retirement, which is a great way to start a new life on the right foot!

Then later I meet my first Camino addict, an Austrian who has walked many different routes and also walked the Via Francigena, another pilgrimage from Canterbury in England to Rome (and further if you wish)
This one I would like to do one day.
Sounds like a great way to explore Italy.

I arrive at Condom in the afternoon.
Looks like the Camino has an endless list of towns with funny names.
It doesn’t stop there.
At the exit of the city, you cross the Baïse.
Which translates to… well, Google translates it.

Condom has no water point, toilets or grocery store in town.
I have to make a big detour just to buy a bottle of water for the evening.

I start the day with a short detour to visit Larressingle, the smallest fortified village in France.

It is indeed very small, but very pretty.
And it’s kind of cool to be there at dawn.
The trail is closed for a good part, making a long and boring detour before reaching Eauze.
It’s so hot that I’m going to eat ice cream.
It’s my favorite treat in town, but I never thought I’d still be eating ice cream on October 22.

I keep walking until dusk and am about ready to stop and pitch the tent, when I see a sign for a pilgrim stop just five minutes away.
I’m expecting picnic tables with room for tents, but this is actually a donativo, a lodge where you’re free to pay what you want.
The host couple and their children are already eating, with a neighbor and a pilgrim.
I have to say I didn’t expect this and I’m not sure what to do but they tell me I can join them for dinner so I do and then tell them why I was a bit surprised that I couldn’t just find a picnic table.
They think it’s funny that I had no idea it was a gite and realize the sign could be confusing.