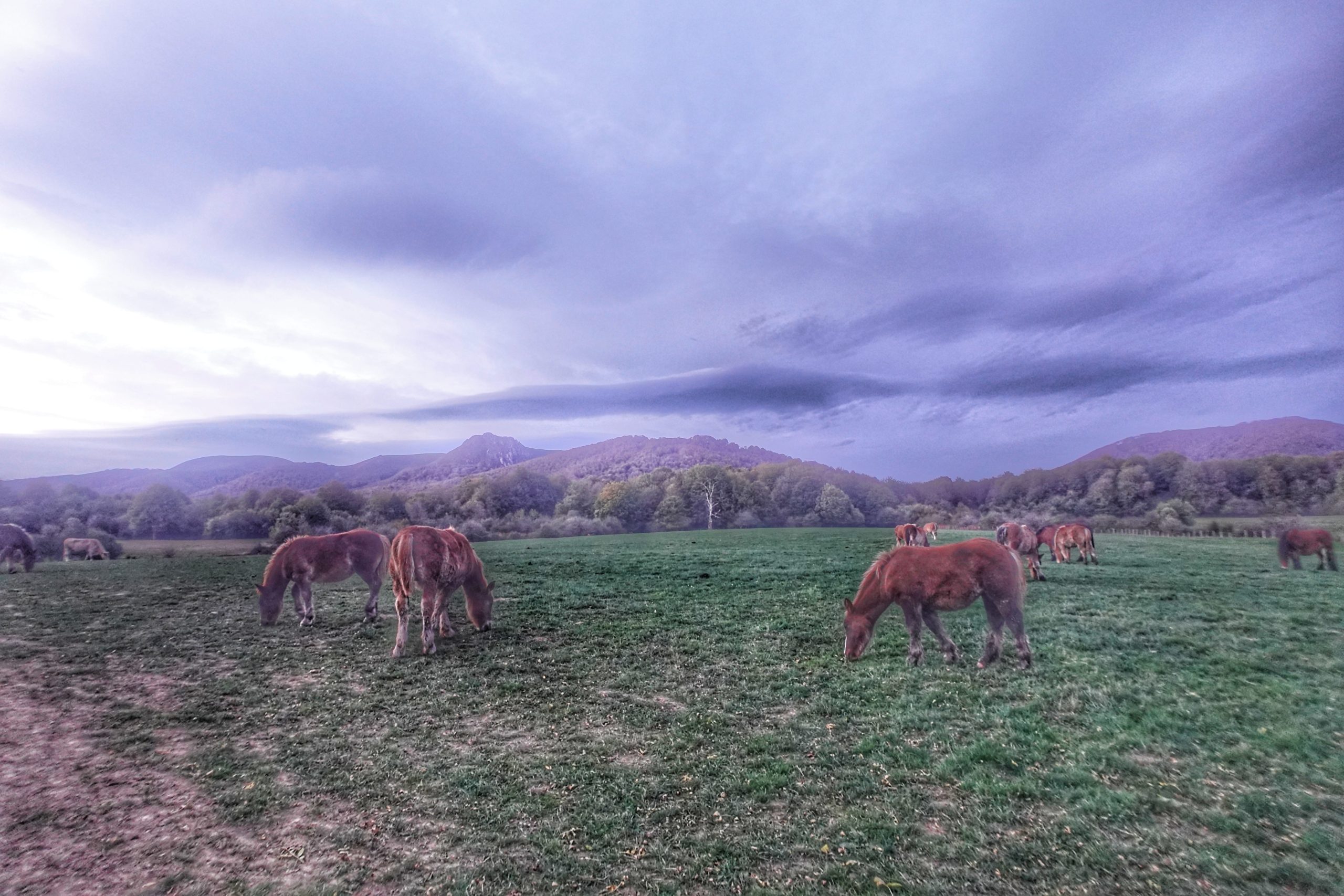 Week 4 on the Camino

I must say that the Gers was not the best.
Lots of road walking and not much else.
I can’t wait to be in the Basque country.

I only see a couple of Belgian pilgrims stopping their hike today.
But when I call the gites in Aire-sur-l’Adour, they are full again!
I just feel like I’m going in and out of bubbles.

I am also looking forward to being in Spain, where the gite situation will be easier as there is no reservation system.

I go to look for food in town, then I leave with my headlamp towards a lake that I saw on the map.

Got my first glimpse of the Pyrenees this morning.
It’s really exciting.
The Pyrenees are my favorite hiking playground (maybe along with Tasmania), and it’s always great to be here.
Even if in this case, I will only go hiking there for a day or two, I can’t wait to be there.

I’ve heard a lot of alarmist talk about crossing the Pyrenees, but given the weather we have, I can’t imagine that being a problem.
Moreover, on the Basque country side, it is definitely not a high mountain territory.

At lunch, I meet a pilgrim (the only one today) who says he has difficulty finding accommodation.
Because it’s vacation time, there are more people on the trail.
Which is weird because I haven’t seen almost anyone in days.

At the end of the day, I have an even better view of the mountain range, with the beautiful Pic de midi d’Ossau, and it makes me want to go back there as soon as possible to complete my “Triple Couronne Pyrénéenne” and hike. the HRP (the high road passing through the Pyrenees).

I only have three days left before Saint-Jean-Pied-de-Port, the end of the Via Podiensis, and the start of the Camino Frances.

I have the Pyrenees on the horizon for a good part of the day.

I started seeing lots of migrating birds at dusk and dawn the past few days. That’s hiker’s entertainment right there.

Another day with no pilgrims seen during the day.
I decide to stop at a lodge tonight so I can take a shower and charge my electronic devices.
It was only the four of us, Hervé from Lyon and two Swiss who started the Camino in Geneva.

I must say that I can’t wait to be in Saint-Jean-Pied-de-Port.
I really need new shoes and socks.

Apparently they close the pass through the Pyrenees on November 1 whether there is snow or not.
It’s a good time. I should be there a few days before.
Although it is possible to walk around, but it will be nice to walk up there.

I hadn’t realized it, but I entered the Basque country yesterday.

I don’t feel well this morning.
I feel really tired and I have a headache, kinda sounds like a hangover, but I haven’t had a beer in ages, actually.

I arrive in Navarrenx, where I stock up, get myself an energy drink, and take some aspirin.
I feel much better after that.
I go to the tourist office to have my pilgrim passport stamped, but I can’t find it.
It’s a real disappointment.
It’s a great souvenir, and I’ve also heard that you can’t stay in certain places in Spain if you don’t have it.

At noon, it is ridiculously hot.
Really hard to believe that November is just around the corner.
I don’t remember ever seeing such weather in France.

As I sit on a bench in a forest for lunch, I am joined by three pilgrims.
They are absolutely horrified that I walk 40 km a day and tell me I can’t have fun.
I always have a hard time being polite to people who feel comfortable enough to tell you that you’re walking the wrong way.
But I do.

Later in the afternoon, I make a short detour to Aroue to fetch water.
I see a lodge that has a large picnic table, so I stop for a snack break.
It is full of pilgrims.
I don’t remember seeing so many in one place.
The person who works there tells me about a chapel where it is possible to sleep a little further.
Sounds good, so I keep walking for two hours.
And this piece is the best section of trail I’ve had in a while.
It’s a beautiful Basque country, with green hills and great views of the Pyrenees.
And a good sunset doesn’t hurt.

Last day on the Via Podiensis and last day of walking in France!

In the morning, I pass in front of a small chapel which offers a very beautiful 360° view of the Basque country and the Pyrenees.

I meet a few pilgrims today, including one… going the other way.
He walked to Santiago by the way of Tours and turned around to return home.
It’s pretty cool.
The Tours route is different from the one I’m taking, but this close to Saint-Jean-Pied-de-Port, all the routes start to merge.

Then I finally arrive at Saint-Jean-Pied-de-Port, where I will take my first zero.
I was also here a year ago, as the GR 10 (crossing the French Pyrenees) passes through SJPDP.
I was only days away from completing a 5.5 month/5300km trek through France that ended up being the most epic/difficult thing I’ve ever done.
It is a beautiful Basque town that is definitely worth spending a zero.

First zero!
I thought I was alone in the gite, but being woken up by two screaming children, I realize that I am not.
So much for a sleep-in.

In the evening, I meet Han, a Chinese pilgrim.
He got stuck in Europe when Covid started and decided to stay because he can work on his computer.
He’s a really cool guy and he studied cinema, which suits me perfectly.
More people come later, it’s very international.
Han tells me that he saw many pilgrims in town.
It’s a public holiday, so many people come for a 3-4 day trek, stopping in Pamplona.

At the exit of the city, I come across a young Bordelais who is hiking for 3 days.
We walk together for an hour before a car stops and announces that there is a fire and that they risk closing the pass towards Spain.
We are undecided, but we finally keep walking.
After a while, another car stops and tells us that the path is closed and that we have to go back to Saint-Jean-Pied-de-Port.
All the hikers around me are still going up which is odd considering they were all told the trail was closed.
I turn around and look at the map.
There is a way to cut and rejoin the winter road which is open.

At noon, I am on the winter road, and I see a sign indicating that I am only 16km from Roncesvalles, the first Spanish city.
I thought this detour would make access difficult today, but it’s not so bad after all.

I see many pilgrims, some very unprepared, wearing street clothes and street shoes.
Guess that’s normal on a trail that could see half a million people this year.
And the Camino is definitely a great trail to make any beginner mistakes.

We separate in Burguete, because the Albergue where we had planned to stop is full.
I will continue to walk and camp, but Han goes to a place 2 km from town where there are dormitories.

It’s funny, I realize that I was in Burguete 2 years ago while browsing the GR 11 (which crosses the Spanish Pyrenees).
On the same day, I crossed paths with the GR 11 and the GR 10 (the one that crosses the French Pyrenees), which I rode last year as the epic conclusion of my long crossing of France.

The strange custom of Mischief Night in New Jersey